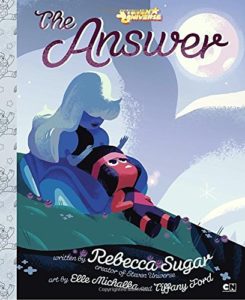 This New York Times best-selling storybook by Steven Universe creator Rebecca Sugar explores the meaning of love as Ruby and Sapphire look to build a new life on a strange planet called Earth. Dazzling illustrations from show artists Elle Michalka and Tiffany Ford capture Ruby and Sapphire’s wonder and surprise as their story takes a course that fate never planned for them. The Answer is not only a charming love story, but also tells the origin of Garnet, leader of the Crystal Gems. Garnet’s story of self-discovery will be treasured by Steven Universe fans of all ages

This book functions as a prequel to the story depicted in Steven Universe.

“This picture book adaptation of an episode of Cartoon Network’s Steven Universe tells an origin story that embraces love and challenges assumptions. Sapphire, the omniscient personified gem, brings her Ruby Guards to Earth to confront a rogue Rose Quartz. The stylized, jewel-toned digital illustrations include illuminated headers and footers housing a comic-strip meta-narrative, which intertwines with the story as both subvert expectations.” (Source: The Horn Book Guide, Spring 2017, p. 52.) 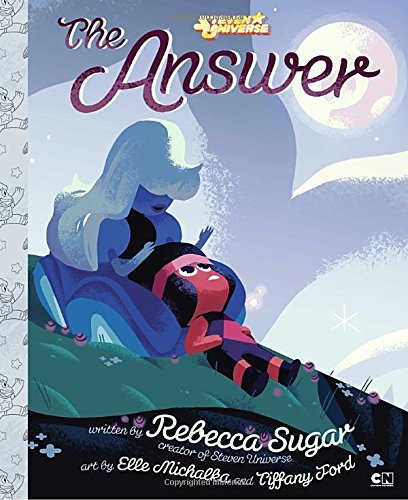