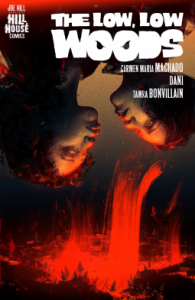 Shudder-To-Think, PA, has been on fire for years. The coal mines beneath it are long since abandoned. The woods are full of rabbits with human eyes, a deer woman who stalks hungry girls, and swaths of skinless men. And the people in Shudder-to-Think? Well, they’re not doing so well either. When El and Octavia wake up in a movie theater with no memory of the last few hours of their lives, the two teenage dirtbags begin a surreal and terrifying journey to discover the truth about the strange town that they call home.

“Those familiar with Machado’s work will find The Low, Low Woods recognizably immersive, even if they aren’t well-acquainted with comics. The book is firmly rooted in horror tropes, and specifically built on a foundation of horror by—and for—women. The main character and narrator for the first issue, El, references Kate Chopin’s The Awakening frequently, using the early feminist novel as a reference point for what she doesn’t want her life to look like. The Low, Low Woods feels very much in line with this kind of work, and even more so with Shirley Jackson. El’s life is defined by the limitations of her rural hometown, which is dying thanks to coal mines that have caught fire deep underground—and which holds secrets yet to be revealed. There’s a lot of fear rooted in that isolation, and in the strangeness of having subterranean fires. But there’s also the horror that comes with the day-to-day existence of anyone who isn’t male, the fears large and small that come with interacting with men who feel entitled to the bodies of women, but also their time and attention—extracting a long death instead of a quick, violent one. By doing that, Machado links this comic gracefully to a long line of horror like The Awakening and Shirley Jackson’s intimate, terrifying stories of all the ways women can be killed.” (Source: AV Club)

“What especially elevates The Low, Low Woods is that it’s largely a coming-of-age story that happens to veer into horror rather than comedy, or a more traditional drama. High school and one’s teenage years can be terrifying all on their own and Machado wisely uses this as a backdrop for the greater horrors to inevitably follow. The approach also keeps the narrative grounded and the readers invested in the newly introduced characters, especially the two young leads El and Octavia, as their social and family lives are developed before things eventually begin to take a turn for the worse.” (Source: CBR) 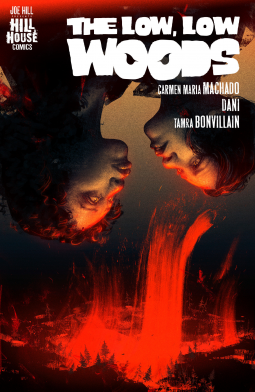