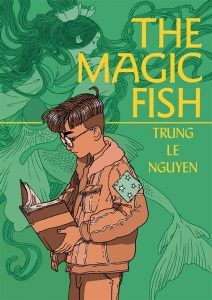 Real life isn’t a fairytale.But Tiến still enjoys reading his favorite stories with his parents from the books he borrows from the local library. It’s hard enough trying to communicate with your parents as a kid, but for Tiến, he doesn’t even have the right words because his parents are struggling with their English. Is there a Vietnamese word for what he’s going through?

Is there a way to tell them he’s gay?

A beautifully illustrated story by Trung Le Nguyen that follows a young boy as he tries to navigate life through fairytales, an instant classic that shows us how we are all connected. The Magic Fish tackles tough subjects in a way that accessible with readers of all ages, and teaches us that no matter what—we can all have our own happy endings.

The Magic Fish includes a child being forcibly outed and a brief, non-graphic reference to the 1998 murder of Matthew Shepard. The second fairy tale in the graphic novel contains horror elements, such as on-page violence against talking animals, murder, and cannibalism.

Starred review: “Three parallel stories bind the generations together: mother and son read aloud Alera, a Cinderella-esque story of cross-dressing true love; mother-in-mourning and her elderly aunt recall the fairy godparent-like magic fish; mother-returned and son-in-waiting share a different magic fish, a voiceless mermaid who learns to speak through dance. Such are the stories that will reveal the truth. Even as his panels end, Nguyen’s magic continues—as writer, his spare author’s note is an articulate reclamation, even reinvention, of the immigrant narrative; as artist, his detailed commentary on illustrative genesis—European, colonial, Asian, American Midwest inspirations—provide both historical and personal revelations.” (Source: Booklist)

Starred review: “Nguyen’s artistry radiates elegance on every page. Pastel shades of red, brown, and purple alternate to signify present, past, and imaginative plot segments. While some panels feature characters in pensive curiosity or profound melancholy, others burst with vibrancy, their exquisite portraits spanning an entire page or across multiple panels. Infused with emotional depth and integrity, this coming-of-age story broadens the range of Vietnamese American creative voices in books for young people.” (Source: Horn Book Magazine)

Starred review: “Detailed illustrations rendered in split complementary colors cleverly distinguish each story line. Nguyen’s poignant debut captures the perspectives of, and essence of the bond between, a parent and child, proving that language—and love—can transcend words. Back matter includes author’s notes that delve into personal inspiration, the interplay between immigration stories and fairy tales, and contextualize the illustrations.” (Source: Publishers Weekly)

“Although Tiến is young and this story is primarily aimed at middle-grade readers, the simple fact is that it will appeal to readers of all ages. It also gives young, queer readers one of the single most important messages they can receive from queer elders: There is absolutely nothing wrong with them. Their stories matter. Whatever happens, they are and will always be worthy of love.” (Source: CBR)

“As children we rarely heard loving and thoughtful stories about queerness or coming out. Pretty much every story dripped with trauma and unhappy endings. The Magic Fish offers readers happiness and magic whilst still feeling completely authentic and real. It’s hard to put into words how well Le Nguyen translates their skills as an illustrator to long-form sequential storytelling. To mold the multiple stories—both fantastical and intimately familial—around Tiến’s journey of self-discovery requires a deft hand. It’s a talent Le Nguyen so clearly showcases.” (Source: Nerdist)

“Though there are moments of stress and doubt, everything comes together, all wrapped up in Le Nguyen’s sumptuous illustrations and intricate linework. The couture dresses worn by the characters in the fairy tales contrast with Helen’s job as a seamstress and the patchwork coat she makes for Tien. Questions of happy endings and sacrifice—the bread and butter of fairy tales—are explored deftly. Notes from the author provide details on his own experience as the child of immigrants who spoke a hybrid language at home. He also includes in-depth information on the fashion and art, which will appeal to close readers of comics.” (Source: School Library Journal)

Hollywood Reporter: “How a Cartoonist Found Inspiration for ‘The Magic Fish’” 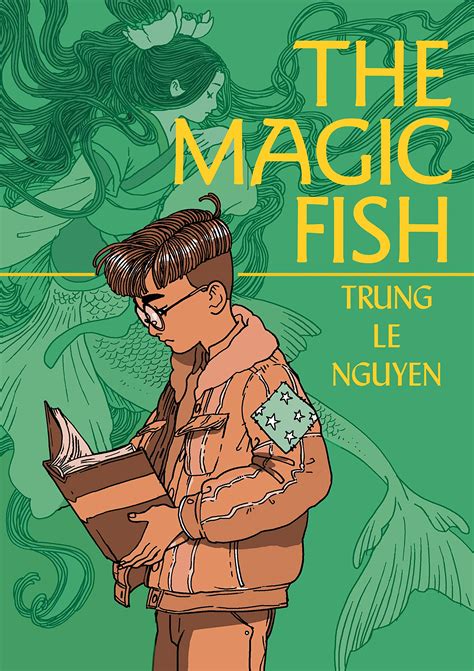