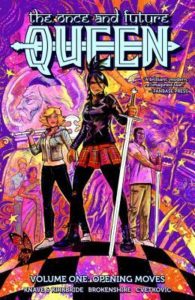 Rani Arturus is a chess prodigy with no plans to be a leader of any sort, let alone QUEEN. After she pulls the legendary sword Excalibur from the stone…well, no backsies. Now she must form a new round table made of friends and family to protect the Earth from an invasion of Fae, who’d like a new planet to call their own. It’s magic, romance, adventure, and excitement as old myths reveal themselves to be fake, and new ones cause trouble for everyone!

The three main characters Rani, Lance, and Gwen enter into a polyamorous relationship.

Knave and Kirkbride keep the story moving at a brisk pace, letting the adventure of the whole thing take center stage while the exposition takes a back seat. Rani quickly accepts her role as Queen and her friends jump right into the fray with her. There aren’t a lot of “this can’t be happening!” moments. Instead, everyone looks at the monsters, magic swords, and wizards and goes, “Yup, that’s weird, but we’re onboard.” In a lot of ways, the story works better because of this structure. We learn enough about the mythos and world to have fun and we get to spend more time getting to know the characters. (Source: Nerdist)

Comics Alliance: “How ‘The Once And Future Queen’ Updates Mythology”

Comicosity: “Interview: Knave and Kirkbride on THE ONCE AND FUTURE QUEEN“ 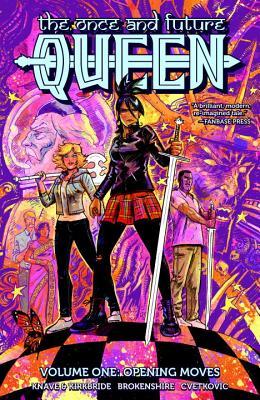 The Once and Future Queen

Collects The Once and Future Queen #1-5.