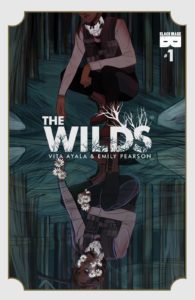 After a cataclysmic plague sweeps across America, survivors come together to form citystate-like communities for safety.

Daisy Walker is a Runner for The Compound, a mix of post-apocalyptic postal service and black market salvaging operation. It is a Runner’s job to ferry items and people between settlements, and on occasion scavenge through the ruins of the old world. Daisy is the best there is at what she does.

Out beyond the settlement walls are innumerable dangers: feral animals, crumbling structures, and Abominations — those that were touched by the plague and became something other. After a decade of surviving, Daisy isn’t phased by any of it — until her lover, another Runner named Heather, goes missing on a job. Desperate to find her, Daisy begins to see that there may be little difference between the world inside the walls and the horrors beyond.

Despite The Wilds #5 being released in October 2018, as of July 2019, the first collected edition has no release date.

“This series is, first and foremost, absolutely gorgeous. Zombie narratives are never of particular interest to me because of how gorey and uninspired they are, but The Wilds is as creative as it is heartbreaking. The team examines racism and classism in this series in a way that doesn’t compromise the power of any of their characters, but also deals with how dangerous privilege can be, especially when the world has ended. Their protagonists are queer women of color who are doing their damndest to keep themselves and their found family alive, in spite of several obstacles that keep putting them all at mortal risk. The Wilds is beautifully crafted, and its exploration of how beauty can destroy as easily as anything is breathtaking.” (Source: Comics Beat)

“The Wilds seemingly does the impossible by helping us to completely reimagine zombie stories as a whole through the simple act of humanizing the process through which they become zombies. Sprouting beautiful flowers and lush greenery from their bodies rather than decaying and creating their own societies, the ‘abominations’ provide ample social commentary in concern to humanity’s kneejerk reaction to kill that which opposes us. All of this while Daisy and Heather try to stay alive in a world turned upside down makes for a personal, deeply felt journey through a new kind of zombie story.” (Source: SyFy)