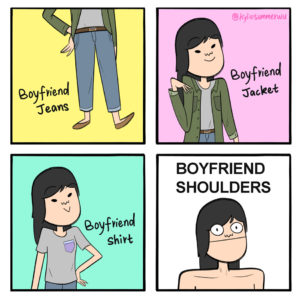 Autobiographical comic strips about the cartoonist’s life as a trans woman in her twenties and thirties.

The comic was syndicated in SF Weekly for Transgender Awareness Month 2016.

“She talks about all sorts of aspects of her life. Some of them are directly related to her being a trans woman who only recently started transitioning, like her comics about breast growth or having a ‘manly’ sounding cough, but others are just about the minutiae of her daily life, like the comics about her idea of a hard-partying weekend, or the struggle of over-complicated tank top backs. Others could be related to her being trans, or they could just be other parts of her personality. I mean, who didn’t watch Orange is the New Black Season 2 and think the whole time that it absolutely needed more Laverne Cox? And all of the comics are equally cute.” (Source: Autostraddle)

Bustle: “This Comic Strip is a Hilarious Peek into the Life of a Trans Woman”

MTV: “How ‘Trans Girl Next Door’ and Other LGBT Comics Are Actually Saving Kids’ Lives”