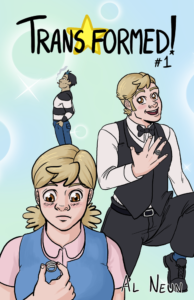 Transformed! is the story of Kay, a young trans man, who finds a strange ring that changes his life forever.

The focal character of this series is Kay, a closeted trans man.

Single issues of this series are available in print through the creator’s store and from Emerald Comics Distro.

“Kay is a closeted pre-everything trans boy; he has a thing for his gay best friend, who has him firmly in the friendzone on the belief that he’s a straight girl. Then he picks up a mysterious ring that transforms him into a much-more-visibly-masculine alter ego, just in time to fling around some magic and fight off a monster…and the best friend develops a crush on that form. So now Kay has to get the hang of his new powers and figure out where these monsters are coming from, while hopefully making some new friends in a trans-teen support group and getting to a point where he can shed one layer of his secret identities.” (Source: LGBTQ Reads)