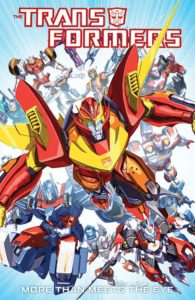 The Transformer Rodimus leads the crew of the space vessel Lost Light on a quest to determine the whereabouts of the Knights of Cybertron, a legendary group of Cybertronian warriors.

This series is intended to stand-alone, and can mostly be read independently of any other Transformers series. After ending in December 2017, its story was continued in Transformers: Till All Are One and Transformers: Lost Light.

This series does not focus on any human characters, and instead features the robotic beings known as Transformers. As discussed by series writer James Roberts, nearly all Transformers use male pronouns. Roberts explained, “I wanted to tell romantic stories. If two characters were in a relationship, the probability was they were both going to be men.”

Some images presented in the series might be deemed gore if they were of human bodies rather than robotic aliens, and may nevertheless be upsetting to sensitive readers.

“A lot of the characterization is handled well, but some is burdened with too much continuity minutiae. There’s no reason a debut issue of a supposedly new reader-friendly series should have so many editor captions encouraging readers to look up older issues. The art should please Transformers fans who don’t find a stylized aesthetic more along the lines of recent animated projects rather than the rugged, functional look of classic Transformers tales. The art lacks depth at times when the shading is kept to a minimum, but the bright colors do lend a nice sheen to every page.” (Source: IGN)

The Guardian: “Kiss me, Chromedome: how the Transformers found peace and same-sex partnerships“ 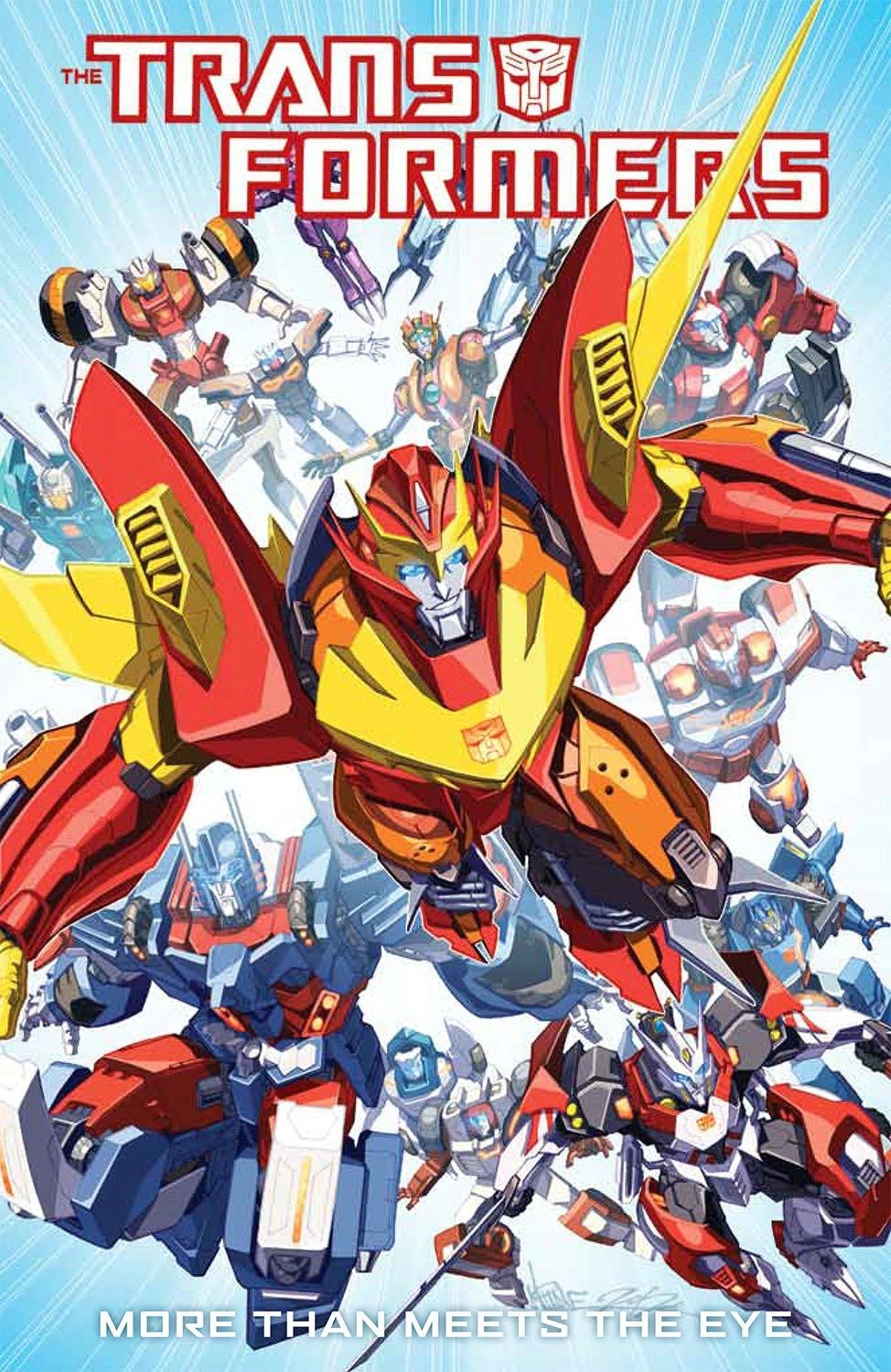 More Than Meets The Eye reunites the fan-favorite creative team of James Roberts and Nick Roche with Alex Milne and sends the Transformers on an epic quest to the farthest reaches of the Transformers Universe and beyond in the three-part story “Liars, A to D!” Also includes the one-shot Death of Optimus Prime. 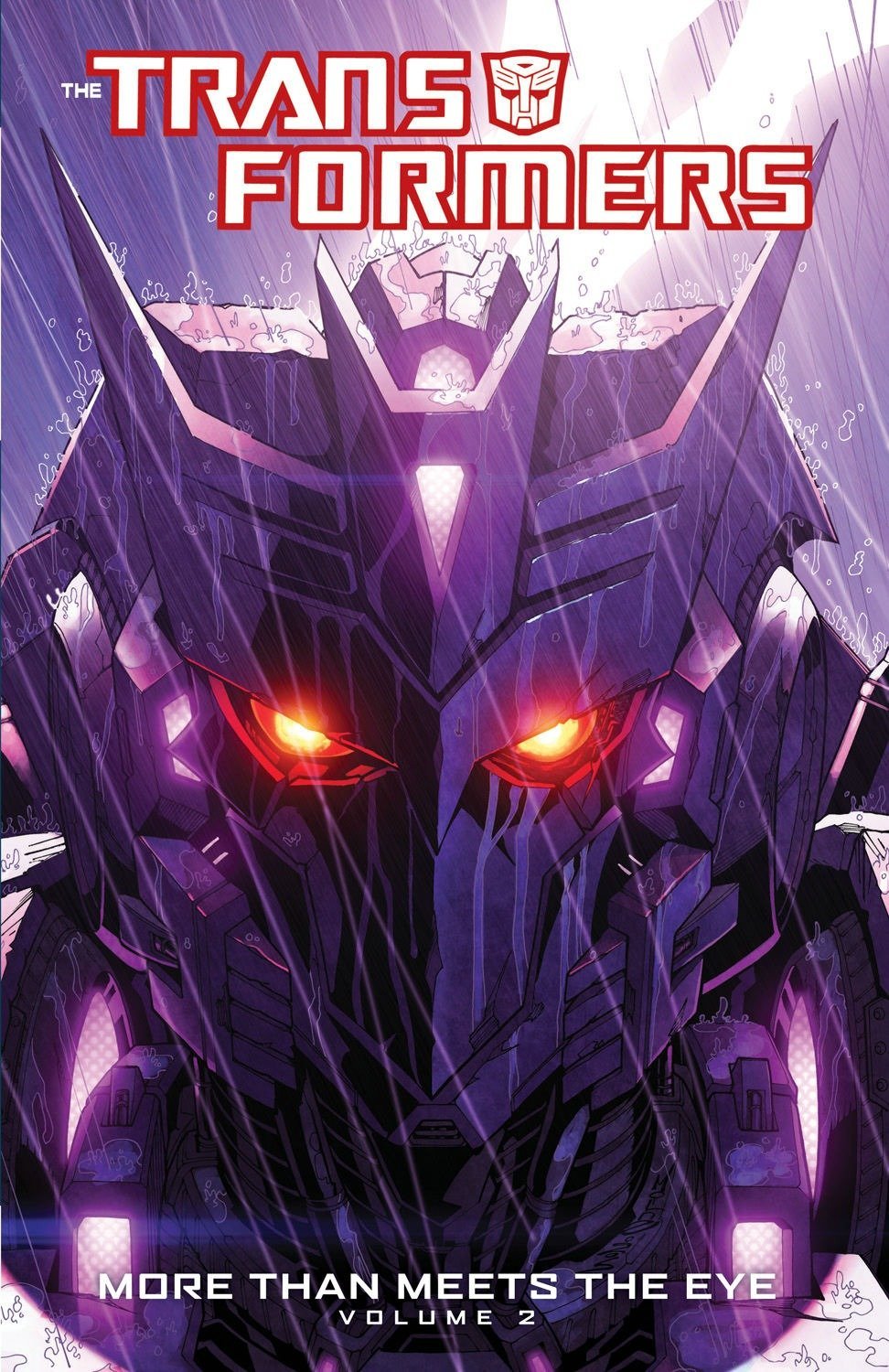 Ratchet, Hot Rod, The Decepticon Justice Division, and Grimlock all take turns on the center stage as the war between the Autobots and the Decepticons transitions into a new phase. 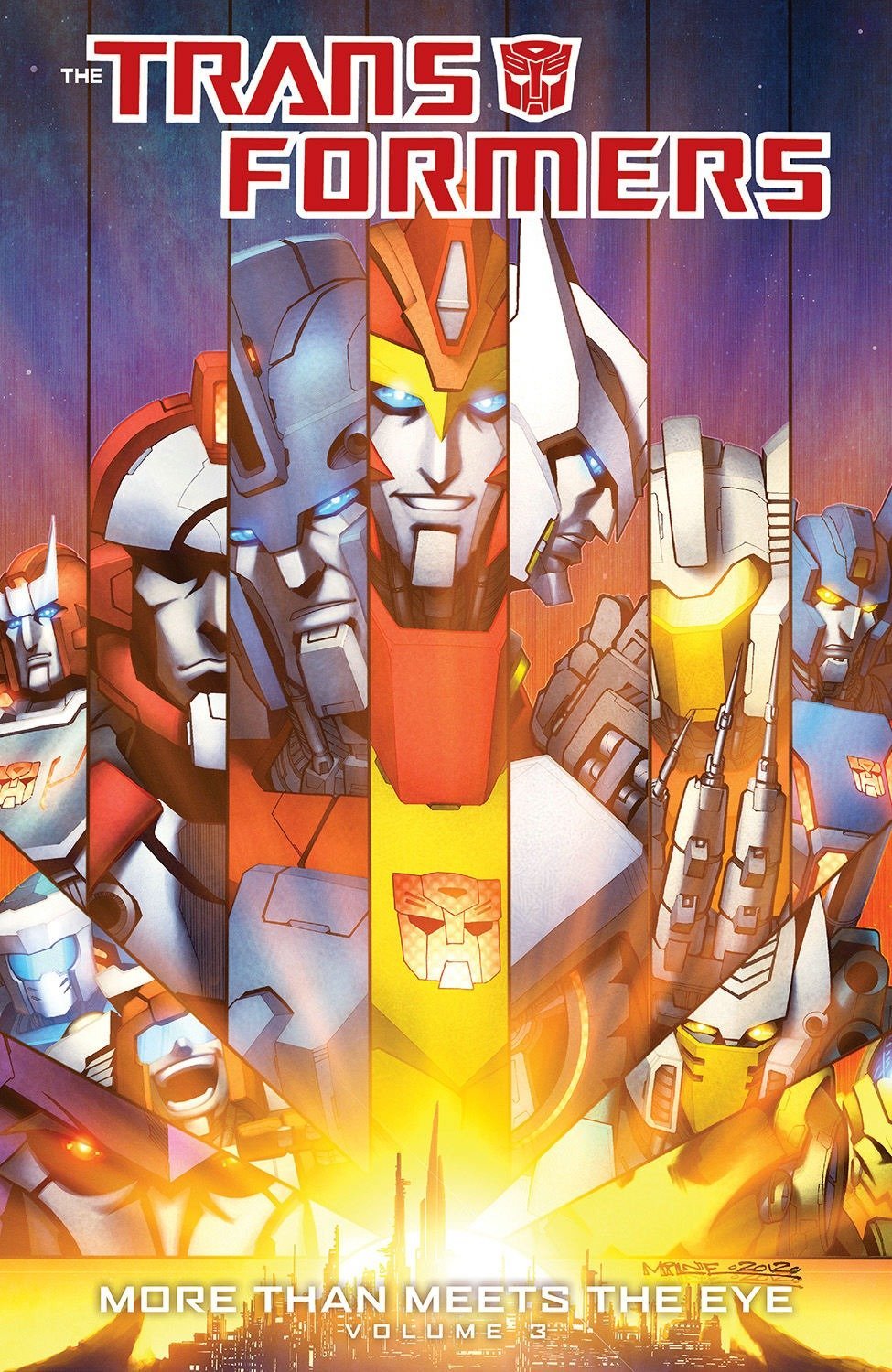 The crew of the Lost Light finally reach Crystal City, home to the mysterious Circle of Light, as the origins of the Knights of Cybertron are revealed. In “Shadowplay” follow along as Rewind begins telling his crew mates a pre-war Cybertron story involving Orion Pax!’ 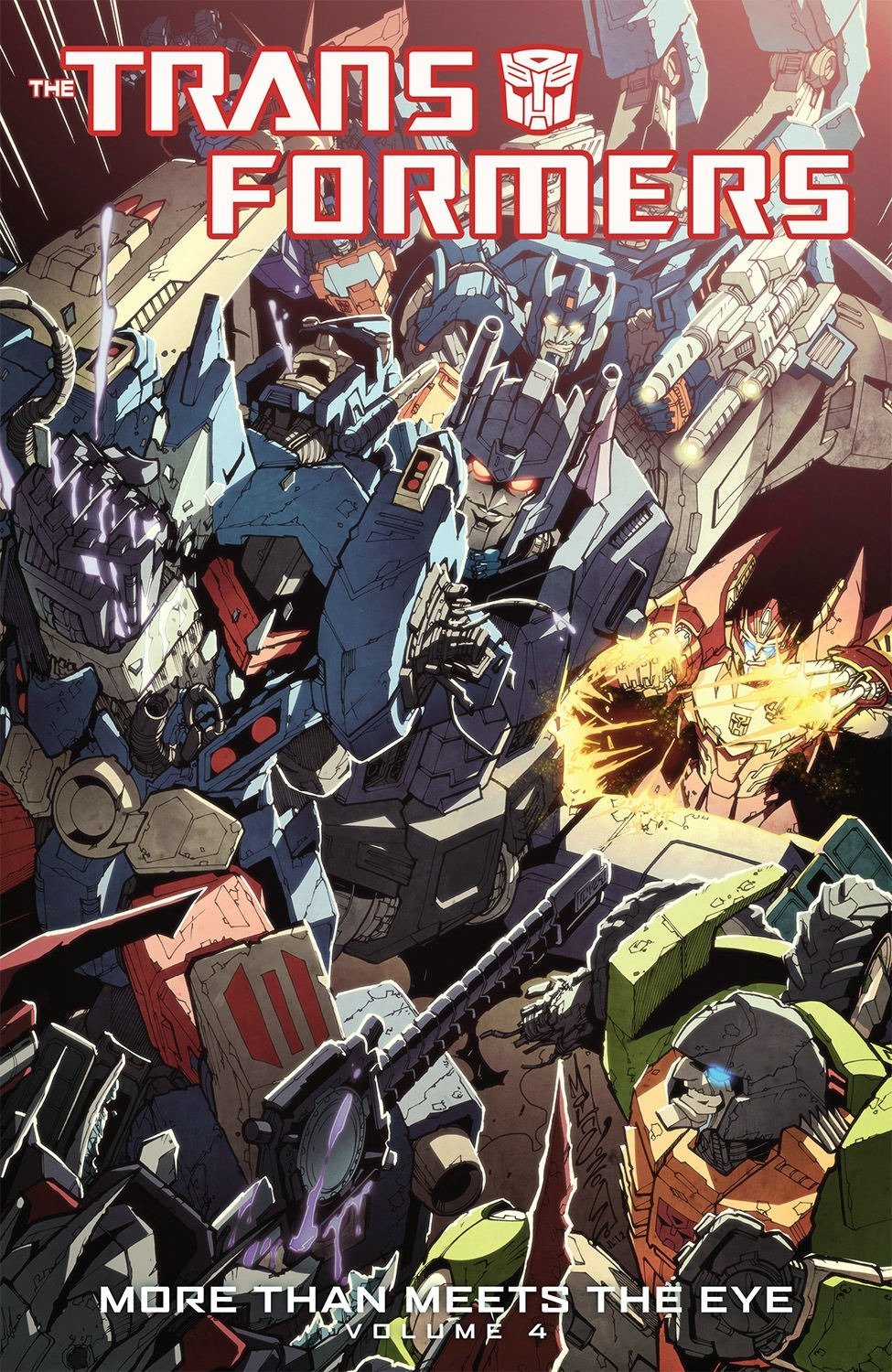 Collects issues #12-16. The journey continues as the crew of the Lost Light confronts a band of rogue DECEPTICONS — with terrible consequences. Plus, a visit to the planet Hedonia — and a chance to put recent events behind them. But all the while, locked in a secret cell underneath the Lost Light, hidden from the crew, a DECEPTICON psychopath is talking…without opening his mouth. And, Rodimus and his crew are confronted by the enemy within — and not everyone will survive the encounter. 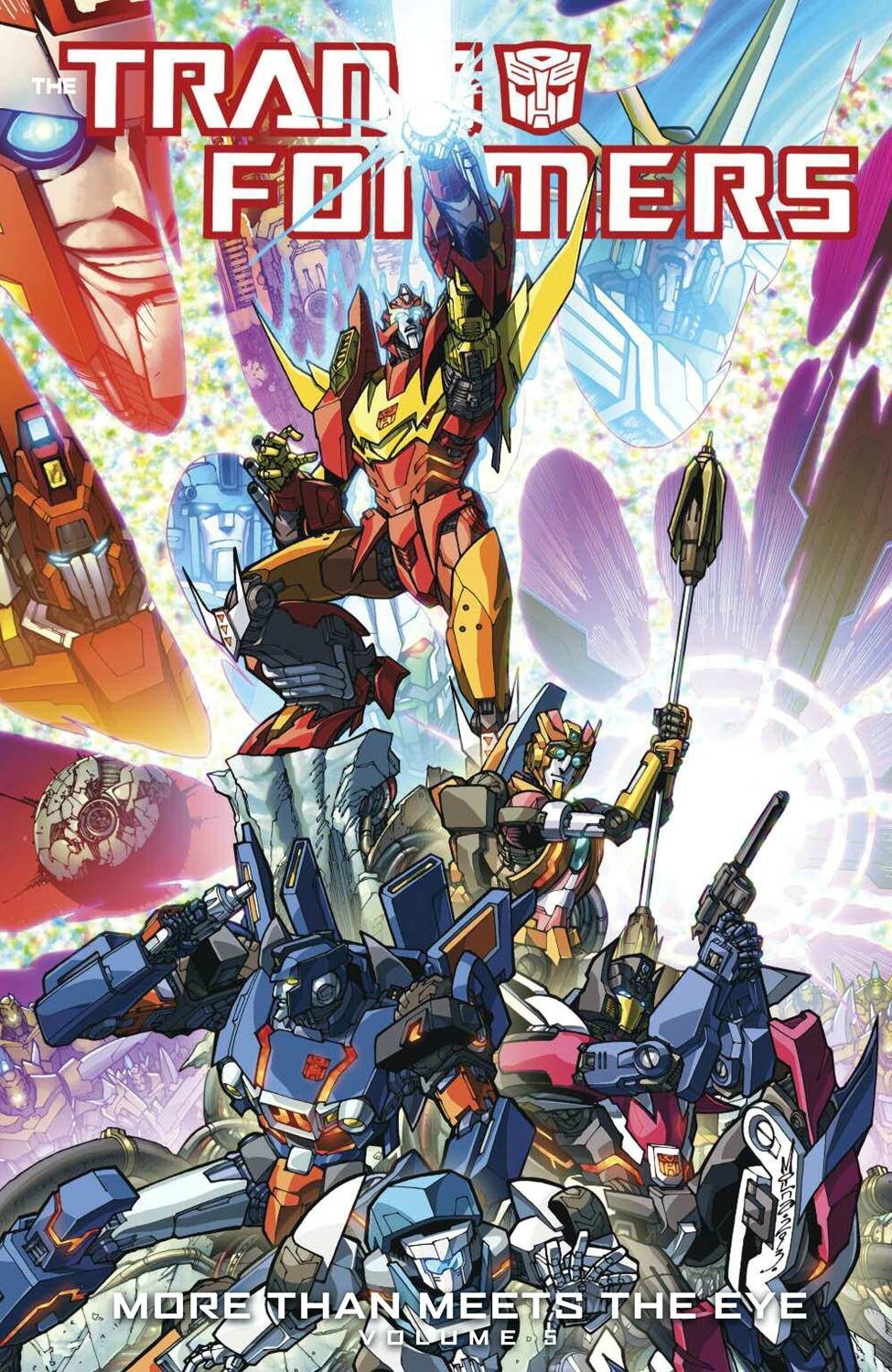 MORE THAN MEETS THE EYE’s first full-blown epic moves into high gear as RODIMUS leads his crew to the gates of heaven-or hell. But larger forces are closing in and an ancient plan is reaching fruition-and as an old friend calls time on the AUTOBOTS’ quest, one thing becomes clear: the LEGISLATORS are on the march. Collects issues #17-22. 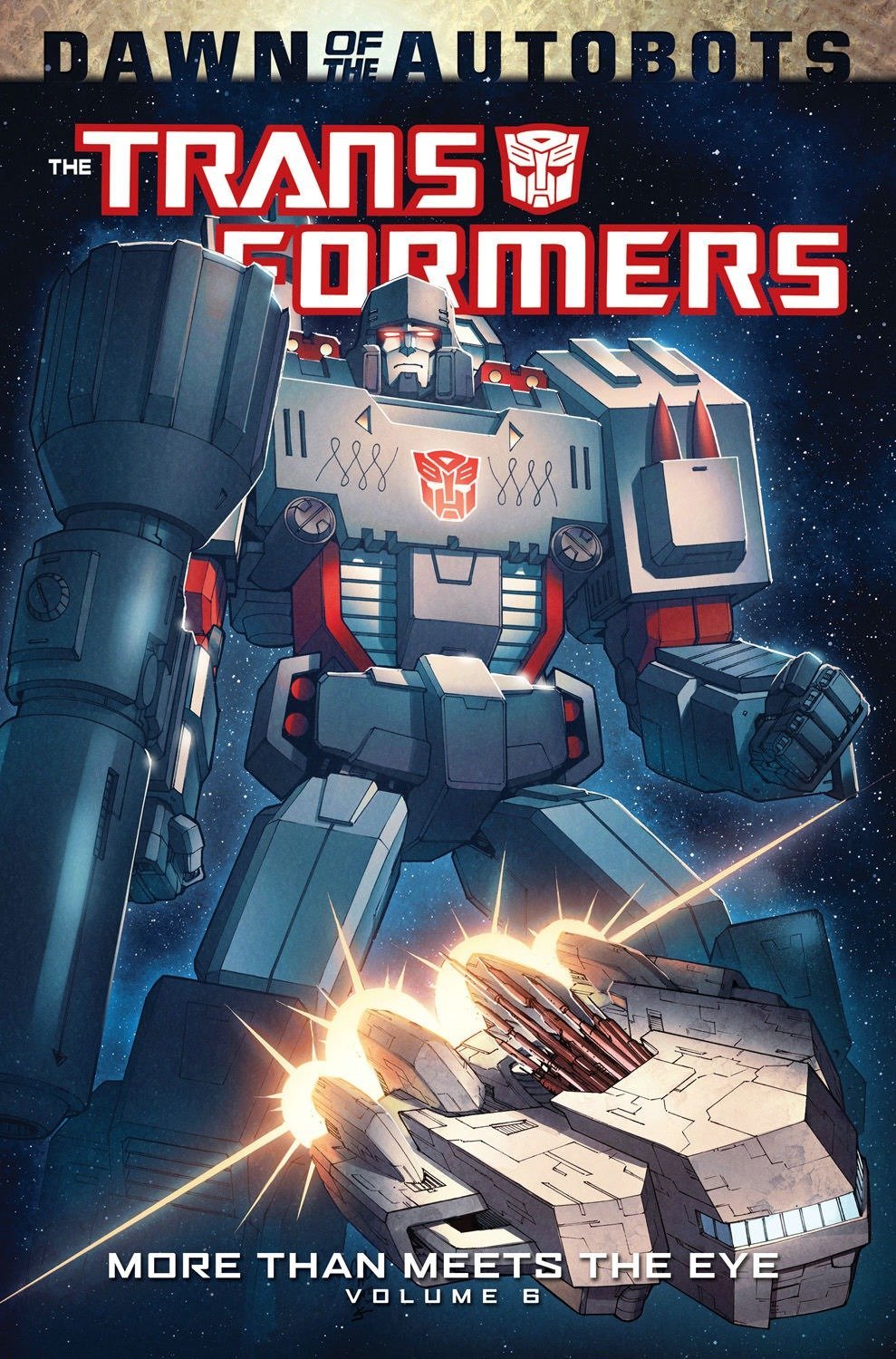 MEGATRON assumes control of the quest to find the Knights of Cybertron—a quest that has never been so urgent, so personal, and so likely to end in tears. But, the crew of the Lost Light isn’t so eager to follow his orders and, as is always the case, past decisions will come back to bite them. 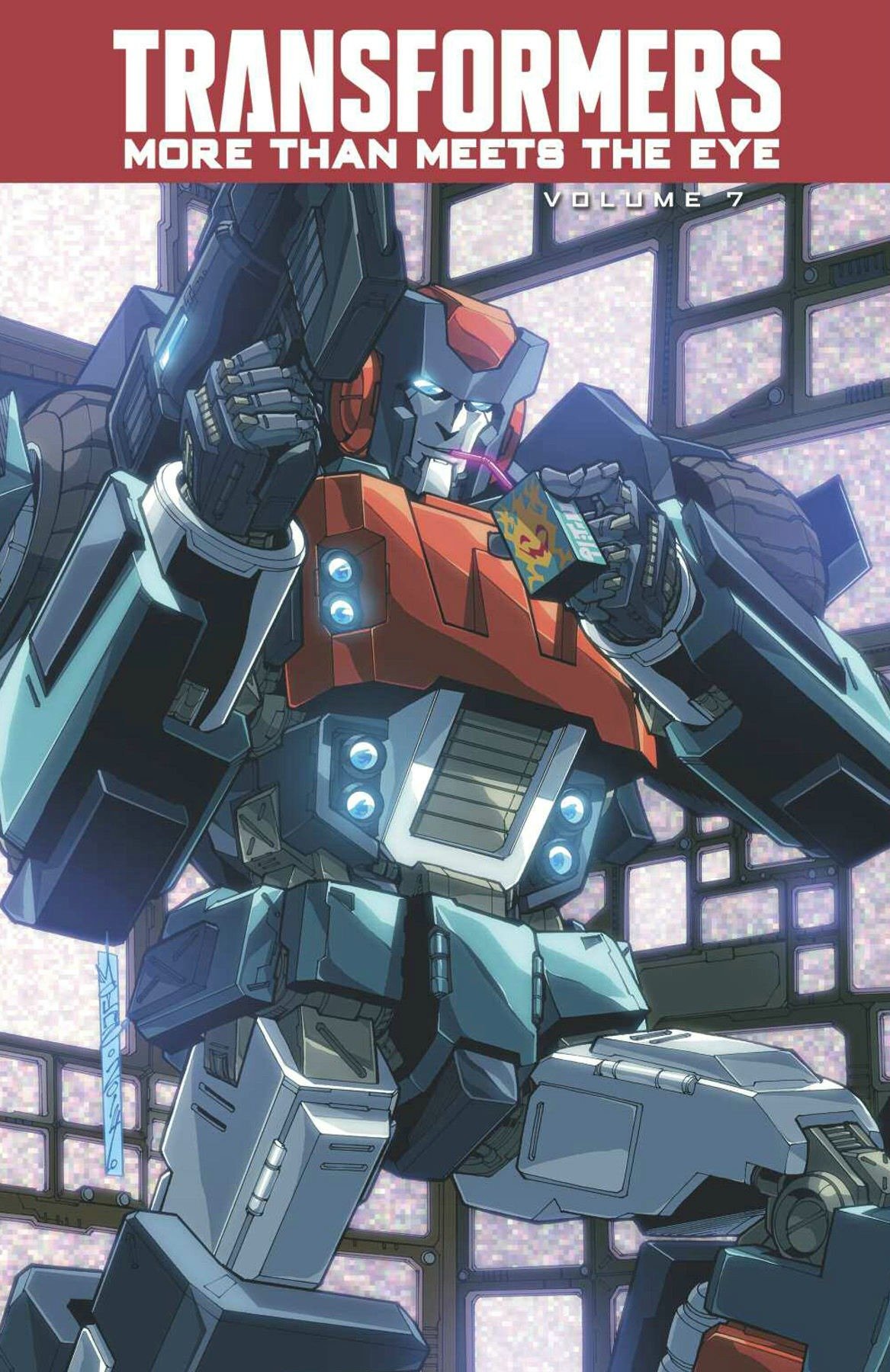 Days of Deception begins. No conflict, no sadness, no angst. Collects issues #34–38. 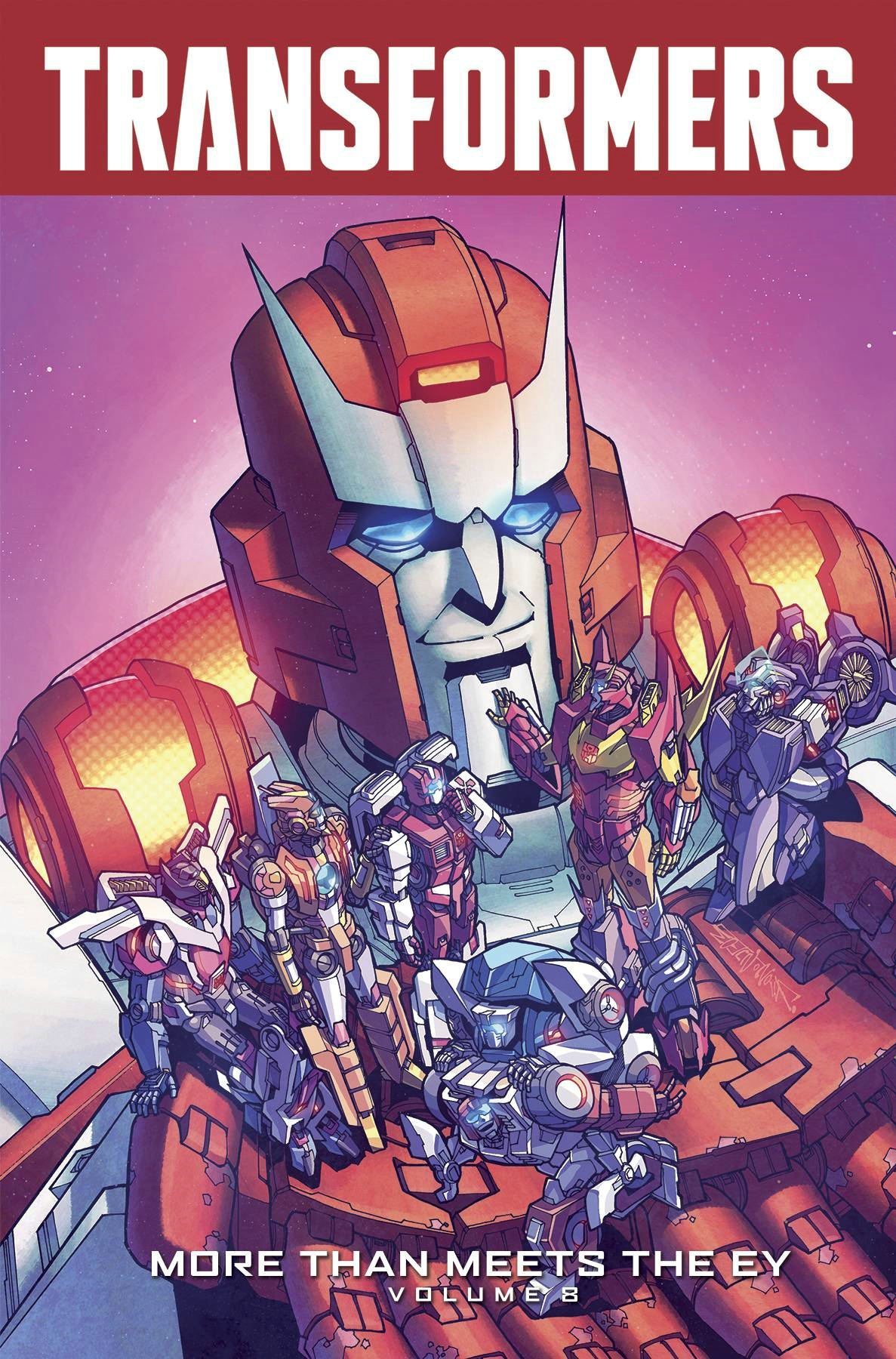 The Decepticon Justice Division discovers that Megatron has joined the Autobots as the crew of the Lost Light start to think that the universe holds no more surprises for them. Of course, they are wrong! Collects issues #39–44. 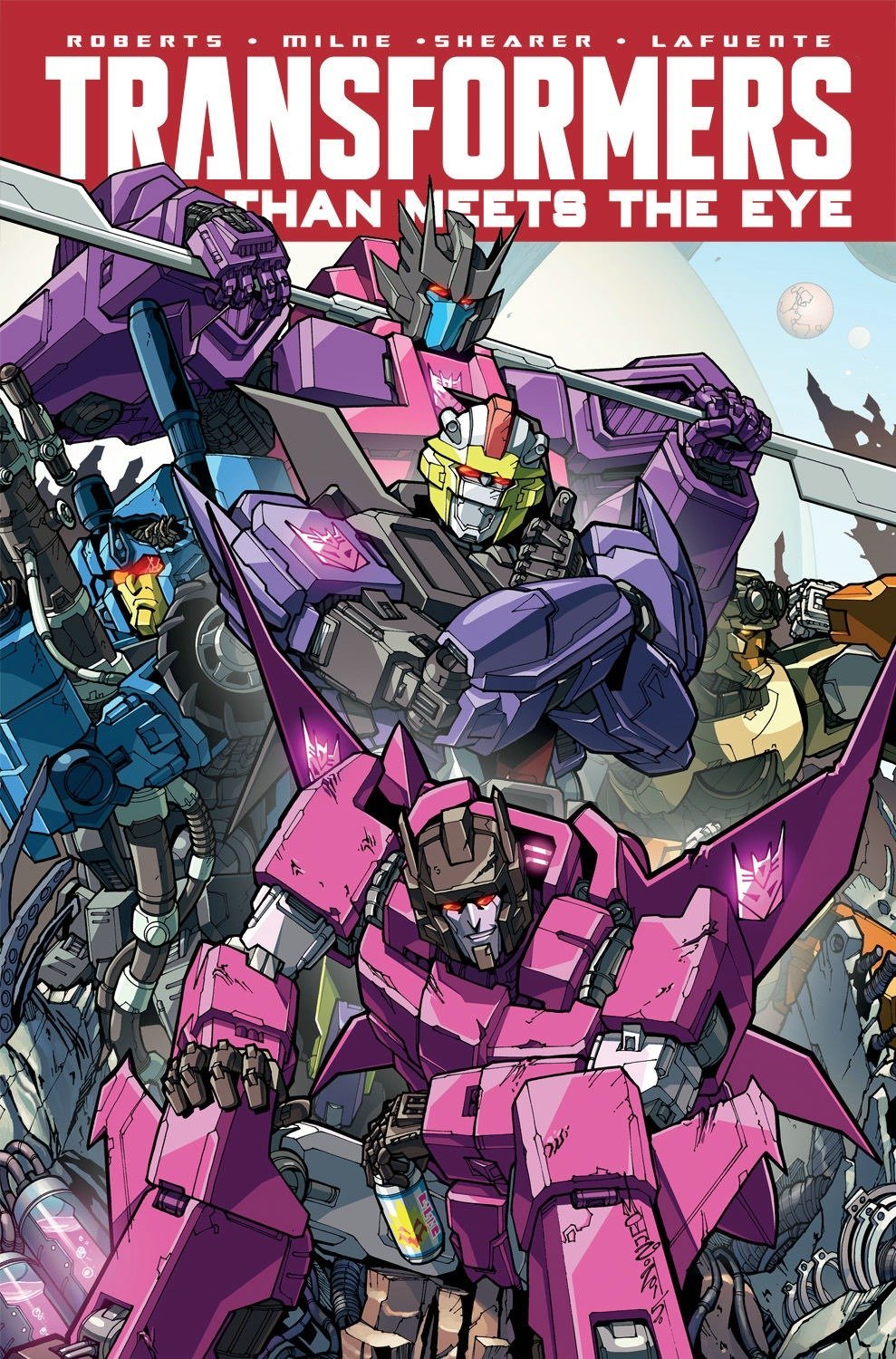 OPTIMUS PRIME struggles to find his place on CYBERTRON where half the population hates him and the other half worships him. Meanwhile, on Earth, GALVATRON doesn’t care what anybody thinks. Collects issues #45–49. 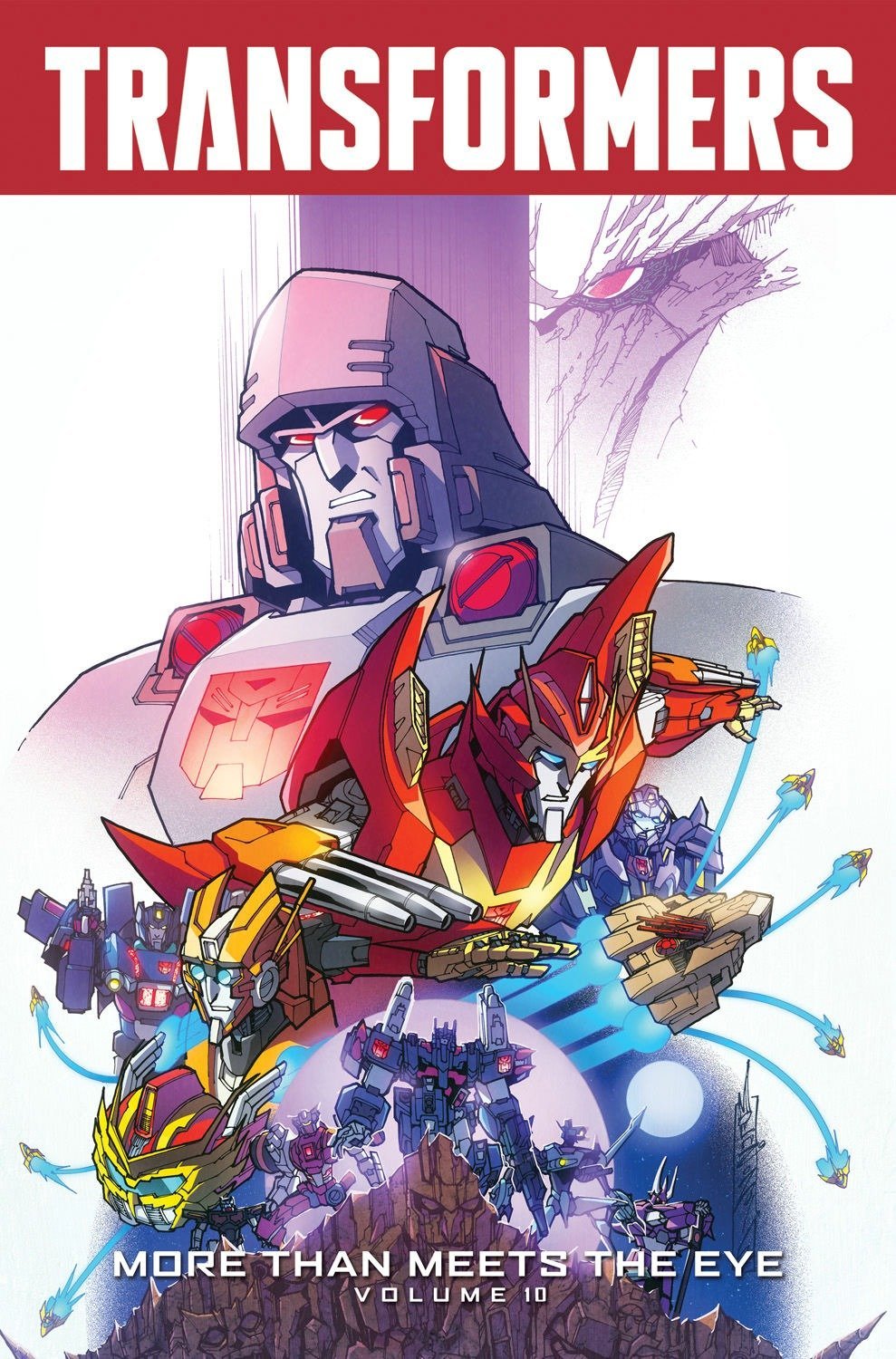 Megatron has rejected his past, but that doesn’t keep him safe from the Decepticon Justice Division. Meanwhile, Getaway is staging a mutiny on the Lost Light, all leading to a climactic showdown, and not everyone will come out the other side. Collects issues #50–55.