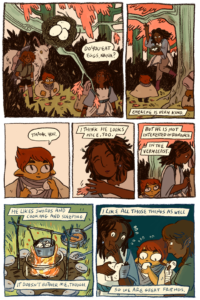 Travelogue is Nana’s story. Nana travels the world with Adi, Emerene, and Princess. Where are we headed today? What should we do next? Let’s sit by the stream and talk about it awhile. We’re in no rush.

Emerene is identified as aromantic. Whether he is asexual as well is unclear.

“Described as ‘a fantasy diary comic,’ Aatmaja Pandya’s webcomic Travelogue shows the adventures of three wizards, Nana, Adi, Emerene and Princess the goat as they travel through a beautiful and wonderfully realized fantasy world. In Pandya’s own words, you should read Travelogue ‘if u prefer side quests to the main story, or if you’ve always wanted to try the fruit from animal crossing.’ Honestly, the more I read this comic, the more I love it. It’s quickly becoming one of my favorite webcomics.” (Source: Autostraddle)

“It’s the Adventure Time era of indie comics, as quirkily drawn fantasies about cute folks having cute adventures dot the comics landscape. But then there’s Travelogue by Aatmaja Pandya, the kind of sweet, breathless, mysterious, all-heart comic that shows you how it is done. The set-up is pretty simple: Nana is a  little wizard, old in years but new in experience, who travels with two warriors, Adi and Emerene, and Princess the goat. The story is about the journey not the experience, with lovely sunrises, beautiful seascapes and the occasional unexplained needle to the heart, all drawn in a lovely, expressive style. Travelogue  has updated sporadically for the last few years — it would be great to have it more often but we’ll take what we can get.” (Source: Comics Beat)

“Travelogue is an epic fantasy adventure, minus the epic, minus the adventure. The result is something soft, thoughtful, and completely new: a fantasy diary comic. It follows the tiny wizard Nana’s travels with their companions Adi and Emerene, doing odd jobs here and there, making brief connections with those they meet and deep connections with each other. he typical trappings of a fantasy setting are present, but relaxed. The atmosphere Pandya creates is contemplative and a bit cute; while it lacks tension or struggle, it also lacks a plot that would require such things – it’s just not that kind of story. Where habitual readers of fantasy might expect to see magic users compare their powers in fireball-filled combat, Travelogue gives us a quiet campsite conversation between Nana and Emerene about their differing methods of lighting a campfire. Instead of fighting the wolves who accost them at night, nature-attuned Nana befriends them. The most violence is when the three travellers spar with each other to stay fit, and the most conflict is when Nana tries to make Emerene wake up early to watch the sunrise with them.” (Source: Yes Homo)