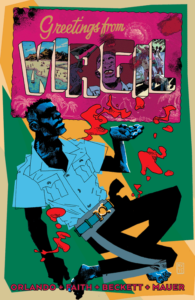 Betrayed, beaten, and banished by his own, an outed cop fights his way across Jamaica for revenge!

“Virgil is a blood-splattered neon journey of awesomeness that redefines the bad-ass and is a brilliant start to a new genre.

Originally a Kickstarter backed book, Virgil is the latest offering from writer Steve Orlando (Midnighter, Undertow) and artist JD Faith (The Pride Adventures, San Hannibal) telling the story of Virgil, a closeted gay police officer who tears his way across his town after homophobic cops out him, beat him and kidnap his boyfriend, Ervan.

The writing by Orlando is exquisite, first introducing Virgil as a morally grey character, not above doing bad things for good reasons and then when he has everything ripped away from him, giving the protagonist a singular purpose and determination to rescue who he loves. Orlando’s skills are extremely prevalent during flashback scenes, giving us backstory and context for Virgil and Ervan’s relationship and giving the readers reason to feel for Virgil. Faith’s art and Chris Beckett’s colours fit the story extremely well with a unique blocky style and bright and vibrant colour.” (Source: Geeks World Wide)

“Virgil is a read with a strong vision and an even stronger voice. Orlando and Faith have put forth a story both affecting and entertaining, driven by a lead who commands attention. The book’s familiar structure is given an investing overhaul, one spurred by Faith’s strong, evocative visuals. It’s a book that pulls no punches, both physically and emotionally, and it’s an impressive win for an equally impressive team.” (Source: IGN) 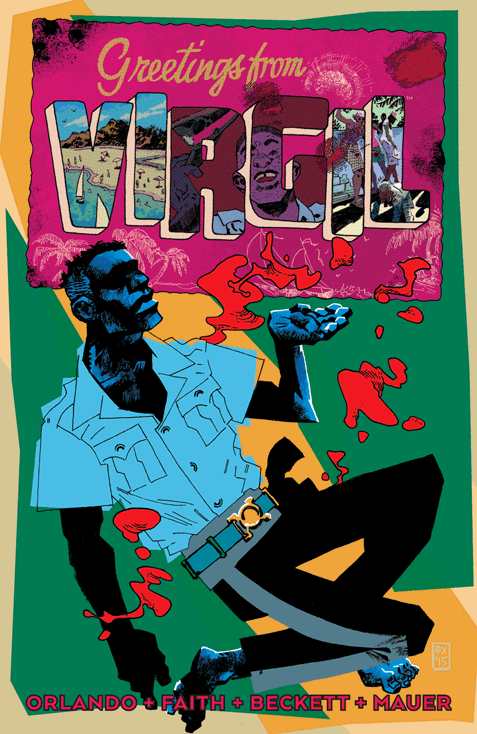 Betrayed, beaten, and banished by his own, an outed cop fights his way across Jamaica for revenge!