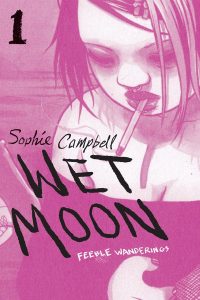 As Cleo Lovedrop heads off for college at the local art school, she’s haunted by her melancholic past: a lost love, a lost child. Friends and enemies live their lives around her, as trouble and dissent brews amongst them: an unseen social assailant spreads slander about Cleo, she is forced to deal with her two brusque roommates, and discovers unsolved mysteries about the girl who lived in her room previously. Elsewhere, Trilby deals with unsettled emotional and sexual issues, and keeping her secret habits hidden from everyone. And Audrey comes to the realization that, despite all her efforts, she always causes her friends distress, while Fern, a peculiar, deformed girl who lives in an isolated mansion in the bayous, begins to notice Cleo and her friends. As the moon grows full and lunar rays shine down, lunacy and moon-calves run free.

Goths, friendship, romance, sex, betrayal, gossip, cats, murder, guilt, a squirrel monkey, and all the terrible and wonderful things people do to each other.

“Wet Moon starts out solidly in “slice of life” territory, following awkward goth teen Cleo Lovedrop as she moves into an apartment and begins her freshman year at a Southern art school. Cleo’s a townie, attending college in the same small town of Wet Moon where her family still lives. Her best friends since childhood, Trilby and Mara, are at the school too, although they’re not rooming together (which is probably for the best, because the three of them mostly bicker at this point). Instead, Cleo rooms with Natalie, who seems mean but may just be shy, and Malady, who always carries pie in her bag.

But from the very beginning, something seems a little creepy, a little off. The setting epitomizes Southern Gothic in the most literal sense—a swamp town of twisting trees, Spanish moss, and rumored giant animals. The girl who used to live in Cleo’s room mysteriously vanished, leaving only a strange round spot on the floor. Unusual people lurk around town: A well-dressed man with an ever-present monkey, an unhealthy-looking girl who almost mirrors the mummy girl from Campbell’s Shadoweyes, and Fern, a bald and unusual-looking young heiress who seems to know more about everyone than she should.” (Source: ComicsAlliance)

“I first picked up Wet Moon, a graphic novel series by Sophie Campbell, last year at the recommendation of a friend. When asked what it was about, my friend said, “It’s like, well, hmmm. People at college, with spooky?” After reading it I can better understand her elevator pitch predicament. There is a lot going on in this story. Slice of Life? Horror? Southern Gothic? Sci Fi/Fantasy? What is the genre? What is the plot? Elements from each of these listed make appearances and merge together seamlessly in Campbell’s writing so that it’s difficult to pigeonhole into any one specific genre. What my friend could tell me about Wet Moon is that it’s full of good art and full of goths. And it is now one of my absolute favorite series.” (Source: Women Write About Comics) 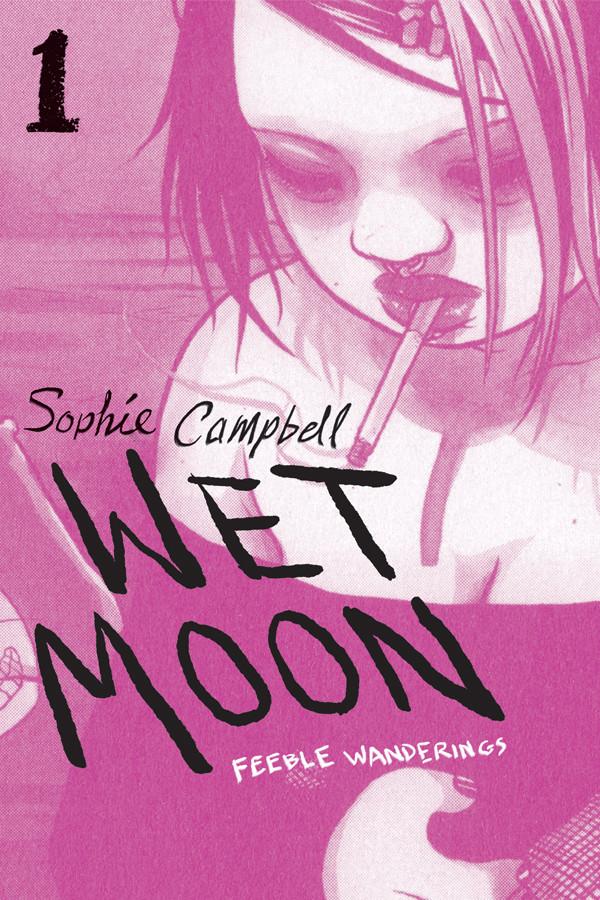 An all-new edition of the first book in Sophie Campbell’s critically acclaimed original graphic novel series, WET MOON! With brand new covers designed by cartoonist Annie Mok (Screen Tests) and special extras in the back, this edition is perfect for longtime fans and new readers alike! 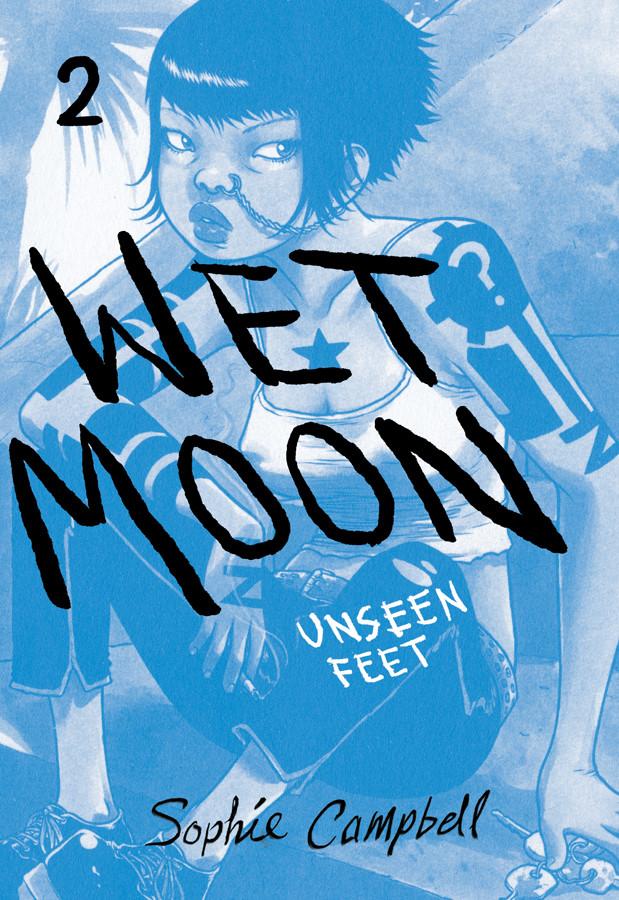 Cleo Lovedrop has a lot of friends in the sleepy town of Wet Moon, and she’s just made one more: the mysterious girl next door, Myrtle. Cleo’s friends think Myrtle has a crush on Cleo, but she isn’t so sure. Then, roses begin to appear on her doorstep…

This new edition of Sophie Campbell’s critically-acclaimed book features a new cover design by Annie Mok and new extras in the back! 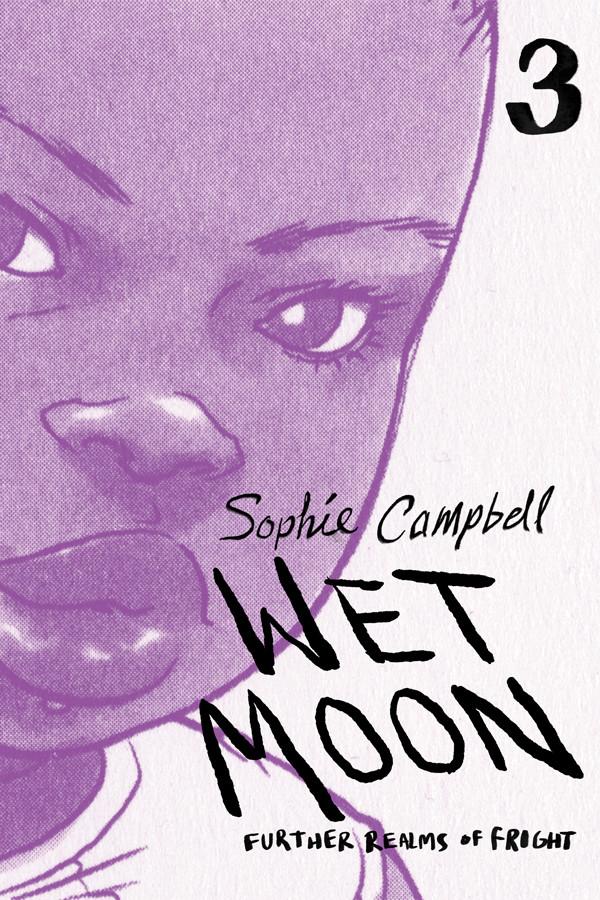 Cleo Lovedrop isn’t sure what to call her relationship with Myrtle. Are they friends? Are they dating? Are they both? But while she’s figuring it out, life gets in the way. First there’s an incident at a Bella Morte concert, and then her sister, Penny, tells her something completely shocking. And then Cleo’s cat goes missing! It seems like Myrtle is the only good thing in her life. But there are moments when Myrtle doesn’t seem… herself. This new edition of Sophie Campbell’s critically-acclaimed book features a new cover design by Annie Mok and creator commentary in the back! 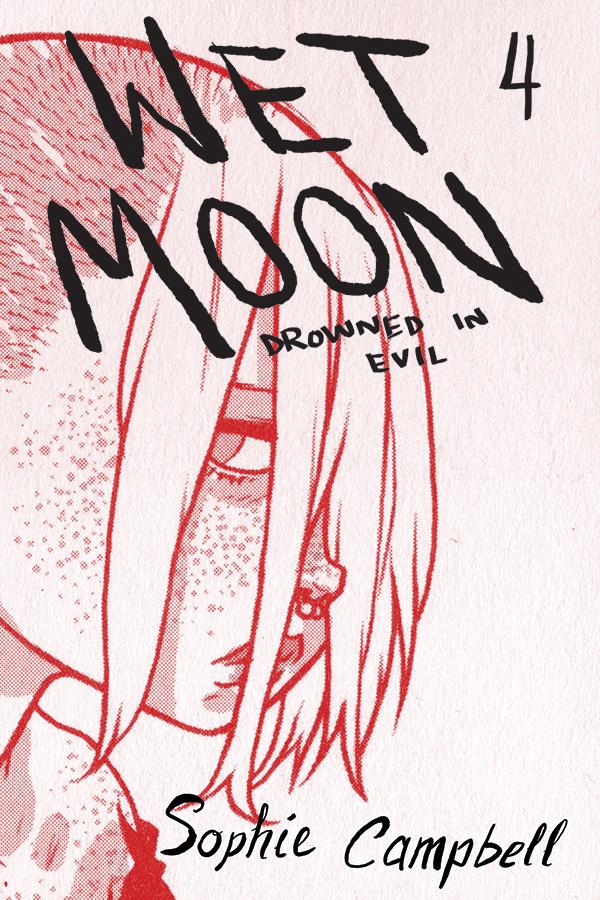 Cleo Lovedrop is trying to be a good girlfriend for Myrtle, but things don’t go quite as planned. Myrtle doesn’t like Cleo being away from her, and when Cleo goes to a comic convention with Trilby, she ends up kissing her good friend Mara. Even though Cleo has vowed to not keep any more secrets, this seems like something she shouldn’t tell anyone… 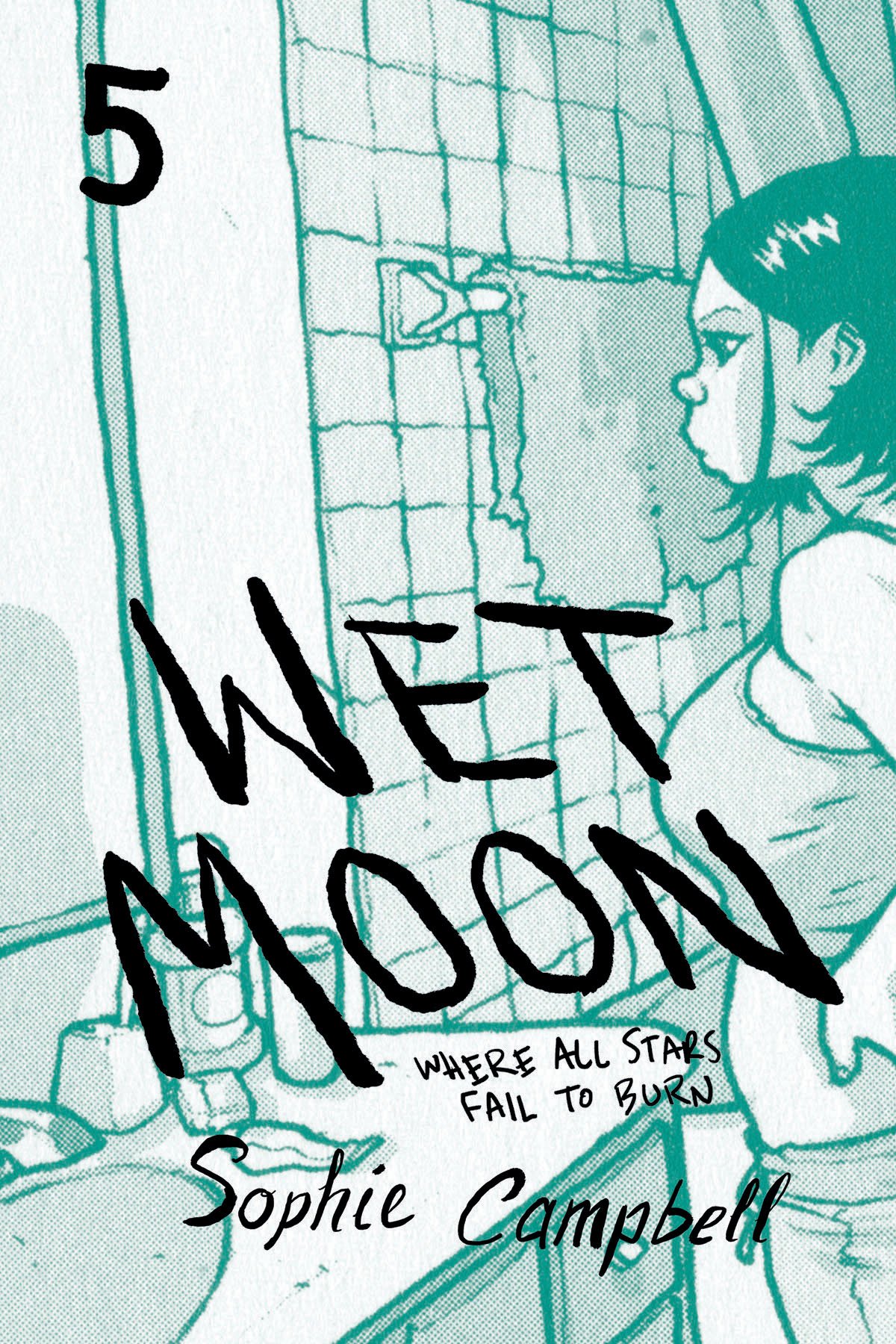 Wet Moon, Vol. 5: Where All Stars Fail to Burn

Cleo Lovedrop has been going out with Myrtle, the girl who left her roses, who wrote her a song, and who took care of her black eye. But lately, Cleo’s been seeing a different side of Myrtle: jealous, aggressive, manipulative… and scary. And with everything else going on—Cleo’s roommate being attacked, Audrey breaking up with Beth, Trilby being distant—Cleo just isn’t sure she can deal with it anymore… 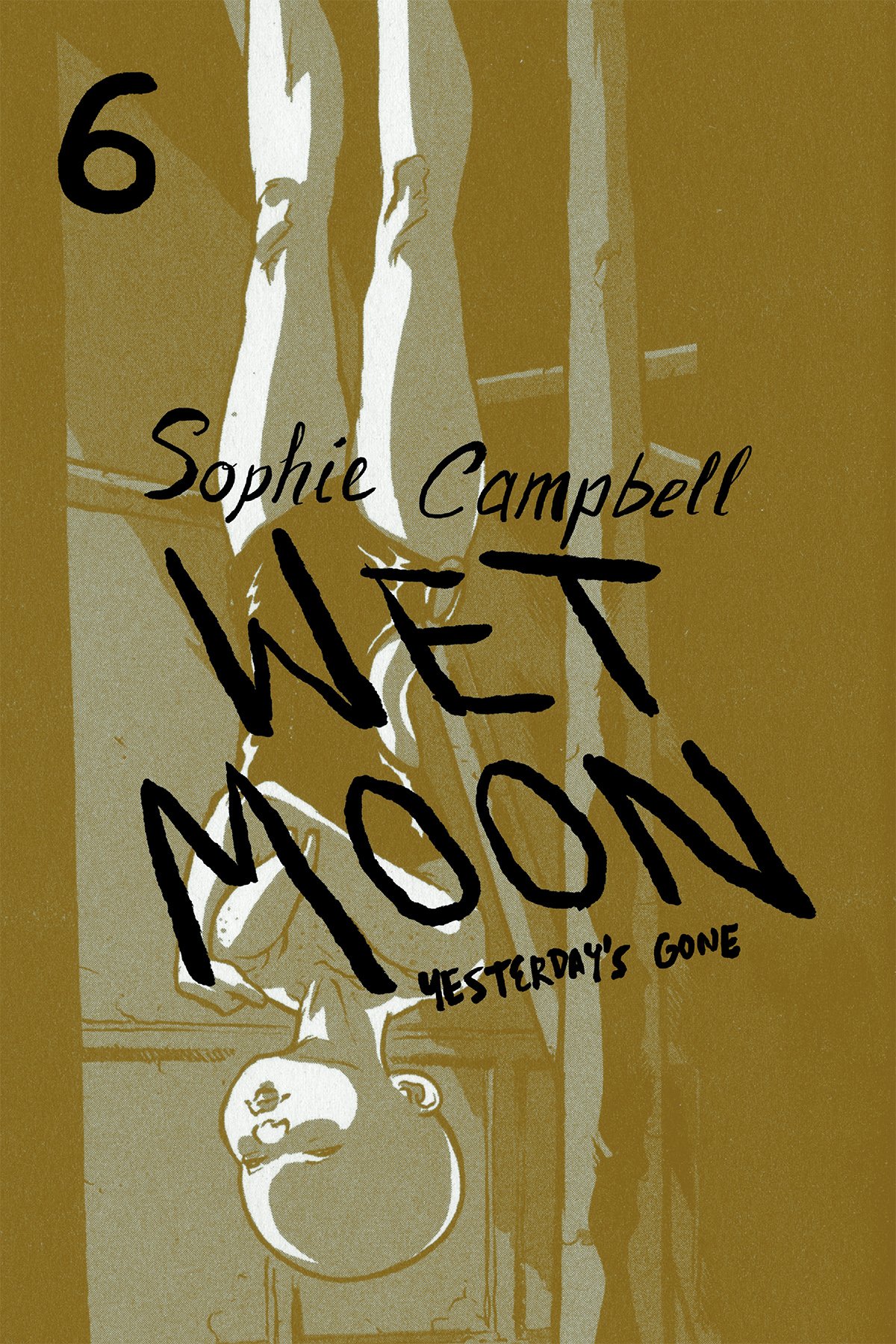 Myrtle Turenne attacked Trilby and left her for dead in the swamps of Wet Moon. While Trilby clings to life in the hospital, everyone else is lost, unsure of what to do. They’re all dealing with the attack in their own ways, and they’ll need to accept that nothing in their lives will ever be the same again. This new edition of Sophie Campbell’s critically-acclaimed book features a new cover design by Annie Mok and new extras in the back!

Trilby is finally out of the hospital, but she feels anything but ready to face daily life again. Even though Myrtle is in prison and Trilby is safe, everything is different and nothing feels right. Cleo, Mara, Audrey, and Martin struggle to support Trilby, but will it ever be enough? Things don’t seem like they’ll ever be the same again, and everyone must pick up the pieces and figure out where their lives are going. Don’t miss the final volume of the critically-acclaimed series!