This is a prequel to Wuvable Oaf.

“Ed Luce’s Oaf Jadwiga is a study in contrasts, a hulking teddy bear of a man with a sensitive soul and a love for kitten cuddles, who also delights in destroying opponents in the wrestling ring as the Satanic-themed Goteblüd. In his foreword for Wuvable Oaf: Blood & Metal (Fantagraphics), Luce writes about how his comic-book creation allows him to explore the duality of his own personality while tapping into the perverse, violent elements of both comics and wrestling, and the dramatic contrast between Oaf in and out of costume makes him an especially compelling queer character.

The inside front cover of Blood & Metal reveals a mat of thick body hair, which is then splattered with blood on the proceeding pages. The author’s name and the title are written in the expanding pools of blood, beginning the book with visceral intensity that is driven by the more hostile, metal-inspired side of the cartoonist. Even before the comics begin, Luce is using the publication design to create a mood of heightened aggression that he then deflates with the humor of the actual stories. The “Battle Zone” strips that start the book offer a kinky, cheeky look at wrestling action both in the ring and behind the scenes, but then the mood mellows for longer, more personal comics about Oaf and the various members of his supporting cast.” (Source: AV/AUX)

“This is probably the raunchiest non-fuck comic I’ve read in recent years. Do not read until midnight. It is not appropriate for kids.

Wuvable Oaf: Blood and Metal is the followup to 2015’s Wuvable Oaf, the first collection of Ed Luce’s long running comic by the same name. Oaf is a doll maker and cat rescuer, former professional wrestler, and adorable bear who doesn’t quite get that’s how guys see him. In Wuvable Oaf we learn about his dolls (stuffed with his excess body hair), his cats (mostly sweet, several of them pure evil), his wrestling career (Satanic and super gay) and his love life (insufficient—until he meets his dream “lil guy”). Blood and Metal is a collection of comics that look back on his wrestling and pre-relationship days, where it was just Oaf and his BFFs.” (Source: Women Write About Comics) 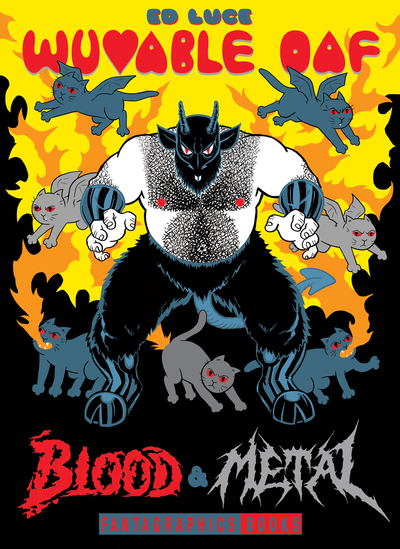