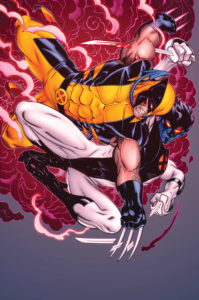 The Age of Apocalypse’s Nightcrawler wants to get home – and he doesn’t care whether he destroys our world to get there! When he betrays X-Force, Wolverine sees red and calls in his street team, but can do what’s necessary to stop him? Meanwhile, Dazzler’s X-Treme X-Men scramble to repair a tear between dimensions! As the multiverse is slowly consumed, no one is safe – and the heroes must split up to fight a war in two universes. But as the rift continues widening, the only chance might be to step into the void! Wolverine battles Wolverine, the X-Treme X-Men’s Kid Nightcrawler makes the ultimate sacrifice, and Wolverine must say a final goodbye to the AoA’s Jean Grey!

This series collects the conclusion of X-Treme X-Men (2012), and crosses over with Astonishing X-Men (2012).

“The main thrust of this issue is the hunt for the “Age of Apocalypse” version of Nightcrawler. He recently betrayed Wolverine and his “Uncanny X-Force” crew and so Wolverine now leads his “Astonishing X-Men” on the trail of this turncoat. Along the way, Dark Beast becomes embroiled in the shenanigans and a Dreaming Celestial is used. It’s this moment when everything amps up another level. The narrative becomes a melting pot of ‘and then they turn up’ moments which ends with everyone poised to fight. It’s the lowest common denominator of superhero comics where people cross paths for barely necessary reasons and then the mayhem and hilarity ensues.

Though the plot may be formulaic, David Lapham’s scripting is sharp in moments. Gambit rattles Wolverine’s cage in regards to running with external teams, which is pretty funny, and a moment with the floating head of Xavier later on is more powerful than any scene involving the floating head of anyone deserves to be. Lapham uses these characters as well as he can in the space permitted but once the steamroller of the plot machinations start turning much of the impact drops from the page as I was just trying to keep up.

The art from David Lopez delivers the story in a workmanlike manner but it rarely seems to go above any base level expectations. He works with some empty black space well in moments to deliver emotion, which is a nice thing to see. The character designs all felt a touch simple in regards to emotive faces with Wolverine feeling the most off character of the bunch. Most page layouts are simple and yet effective. Lopez is definitely a greater strength in moments of action than he is with all the talking heads.” (Source: CBR)