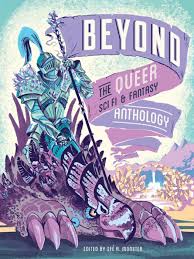 Swashbuckling space pirates, legendary dragon slayers, death-defying astronauts, and monster queen royalty. All this (and more!) in BEYOND, the queer sci-fi and fantasy comic anthology. Featuring 18 stories by 26 incredible contributors, the BEYOND ANTHOLOGY celebrates unquestionably queer characters hailing from across the spectrum of gender and sexuality, front and centre as the heroes of their own stories; exploring the galaxy, mixing magic, having renegade adventures and saving the day!

As of May 2018, the softcover edition is sold out from Beyond Press, although it is still available from some individual contributors.

A second anthology, Beyond II, was released in 2018.

“With access to the internet and, in particular, crowdfunding websites, the “if you don’t like what’s being published, make your own comic” attitude has begun to change the momentum of the entire comic industry. Independent creators can fill niches left empty and make the kind of content they wish they saw more of. So, Beyond: The Queer Sci-Fi & Fantasy Comic Anthology (self-published) is one of many, and in great company, but it’s also one of the strongest and most readable anthologies available today.” (Source: The A.V. Club)

“This anthology is one of the most important works of Queer literature I have read in a while. Granted, I haven’t read the vast majority of Queer literature, but Beyond is personal and special. This is the kind of book I wish I had read when I was a teenager, or even younger, because it would have shown me perspectives and ways to live a life authentically that I considered unimaginable.

“Several stories in Beyond focus on the theme of escaping from a troubled or oppressive society. Both The Graves of Wolves, by Ted Adrien Closson, and Islet, by Niki Smith, feature protagonists who are escaped soldiers living with same-sex partners and young children. Similarly, Luminosity by Gabby Reed and Rachel Dukes follows two queer women of color as they grow up together, fall in love, and abandon the NASA-esque organization that exploits them.

The process of escaping often becomes the process of discovering, and then creating. Several stories in Beyond follow protagonists that are carving their own paths, including a clever pirate and perhaps cleverer regent who attempt to trick each other in Taneka Stotts and Christianne Goudreau’s A Royal Affair. Also, the Instamen in Jon Cairn’s O-Type Hypergiant, who must re-define their existence as the purpose for which they were created  changes. However, The Dragon Slayer’s Son by Sfé Monster best sums up this theme.

Eva and Brenn’s journey in The Dragon Slayer’s Son requires them to re-define family outside of their native culture’s context. Many of the stories in Beyond feature non-traditional families, including Of Families & Other Magical Objects by Reed Black, in which a gay, interracial couple retrieves their daughter from a goblin house, and Twin-Souled by Kate Ebensteiner and Bevan Thomas, which features a two-spirited Chieftainess who protects her family by merging with the spirit of a Bear totem. My favorite—and I must admit bias here, because I have been reading and loving Blue Delliquanti’s webcomic O Human Star for quite a while—was Optimal.

Beyond is the sci fi and fantasy anthology of your queer and trans dreams.” (Source: Women Write About Comics)