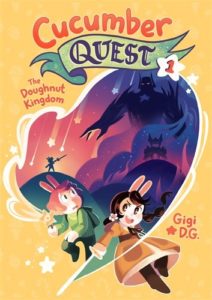 “Gigi D.G.’s Cucumber Quest is one phenomenally goofy webcomic. All the characters are bunny people adorably rendered like plushies. Seriously, their heads are so round and fuzzy I wannna squeeze them until they pop. As if they weren’t cute enough, a lot of the characters are also dressed up like foods. Princess Parfait is covered in strawberries, Sir Carrot sprouts orange roots and Sir Bacon has wavy brown hair that looks like savory foodstuffs. Later, they encounter characters who are festooned with seashells or have mouths as wide as cymbals.

The bright, candy-colored look makes it easy to dismiss Cucumber Quest as baby stuff. The comic is all-ages, true, but it’s also brimming with the sort appeal that made Adventure Time and The Powerpuff Girls such a hit with adults. The comedy tickles in its cheerfulness and its lack of cynicism.” (Source: CBR)

“The night before Cucumber leaves for magic school, he receives a mysterious missive from his father, launching him on an increasingly absurd adventure. But what’s the danger? And why can’t Cucumber’s heroic sister go in his stead?

Gigi Digi’s Cucumber Quest is a playful poke at the conventions of heroic boy fantasy stories. Cucumber is about to head off to Puffington’s Academy for the Magically Gifted and/or Incredibly Wealthy, when he receives a letter from his father at the royal palace. All Cucumber wants to do is go to school, but all the adults around him tell him he must embark on this coming-of-age quest.

With its bunny protagonist and colorblock artwork, it would be easy to think Cucumber Quest is a children’s comic, and in fact it is so far kid-friendly. But its sly moments sneak up you, and will be appreciated by anyone who ever questioned the logic of certain epics. Is that sorceress/witch/protector of the world really omniscient, or just nosy? For that matter, why doesn’t the sorceress/witch/protector of the world save the world instead of a little boy? And why should the little boy be the one fated to save the world? And why does everyone insist he’s fated to save the world, especially when his sister Almond is far more qualified for the task?” (Source: io9)

“Young Cucumber is a nerdy bunny on his way to magic school, something he has been looking forward to all his life. But just when he’s about to leave, he gets a letter from his pushy jerk of a father, telling Cucumber that he needs to ditch school and fulfil his destiny as a legendary hero by stopping the fearsome Nightmare Knight. Cucumber is stricken, not to mention confused. After all, wouldn’t his little sister, the knight-in-training Almond, make a much better legendary hero?

Cucumber and Almond travel through the Doughnut Kingdom and out into the wider world of Dreamside, where they meet a negligent oracle, a cowardly knight and a host of oddball princesses, bakers, bandits, inventors and monsters, not to mention the Nightmare Knight’s minions.” (Source: Kotaku)

“Gigi D.G.’s luminous, all-ages adventure has been an online hit for years now, but in 2017, its first volume was released in print giving a whole new crop of young readers a chance to view the world of Dreamside and its cast of rabbit-eared heroes, villains, and all those who lie between. It is that last group that elevates this story of a brother and sister facing down an ancient evil — that wide swath of henchmen, princesses, knights, and even the ancient evil himself that are not all that they appear. Paired with D.G.’s luxurious visuals, including some of the deftest and most inventive coloring and lettering in modern comics, Cucumber Quest continues to fire on all cylinders for all possible readers.” (Source: The Verge) 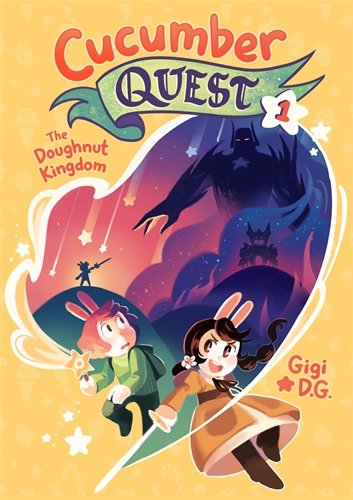 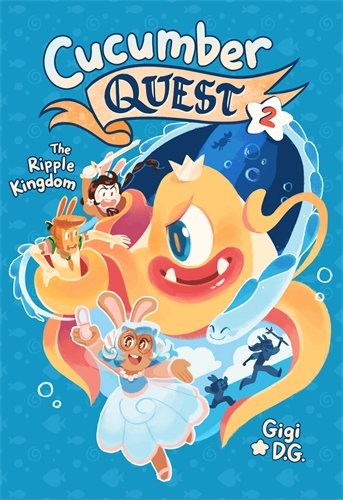 The quest to save Dreamside continues! After a surprise attack at sea, Cucumber finds himself in the Ripple Kingdom, home to white sand, blue waves . . . oh yeah, and the giant, terrible squid monster holding Almond and Sir Carrot captive. Can our so-called “legendary hero” rescue his companions from the nefarious Splashmaster?

Good thing Princess Nautilus is here! With her wit, charm, and positive attitude, there’s no way they can lose. But saving the day won’t be as simple as it seems once a 500,000-year-old secret comes to light . . . 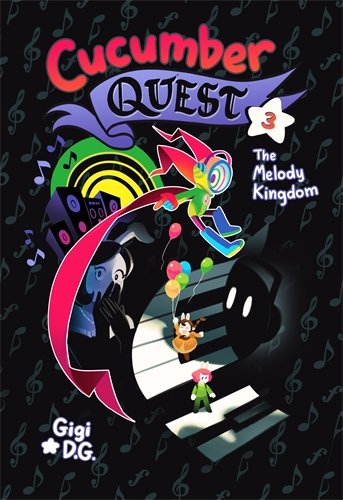 Now with Princess Nautilus as part of their entourage, Cucumber and Almond travel to Trebleopolis to warn Princess Piano that Noisemaster, second of the Nightmare Knight’s minions, might be after her! Unfortunately, they arrive just in time for Queen Cymbal’s birthday and the Queen refuses to stop the festivities . . . that is until Noisemaster succeeds in capturing Princess Piano and threatens to destroy the city. 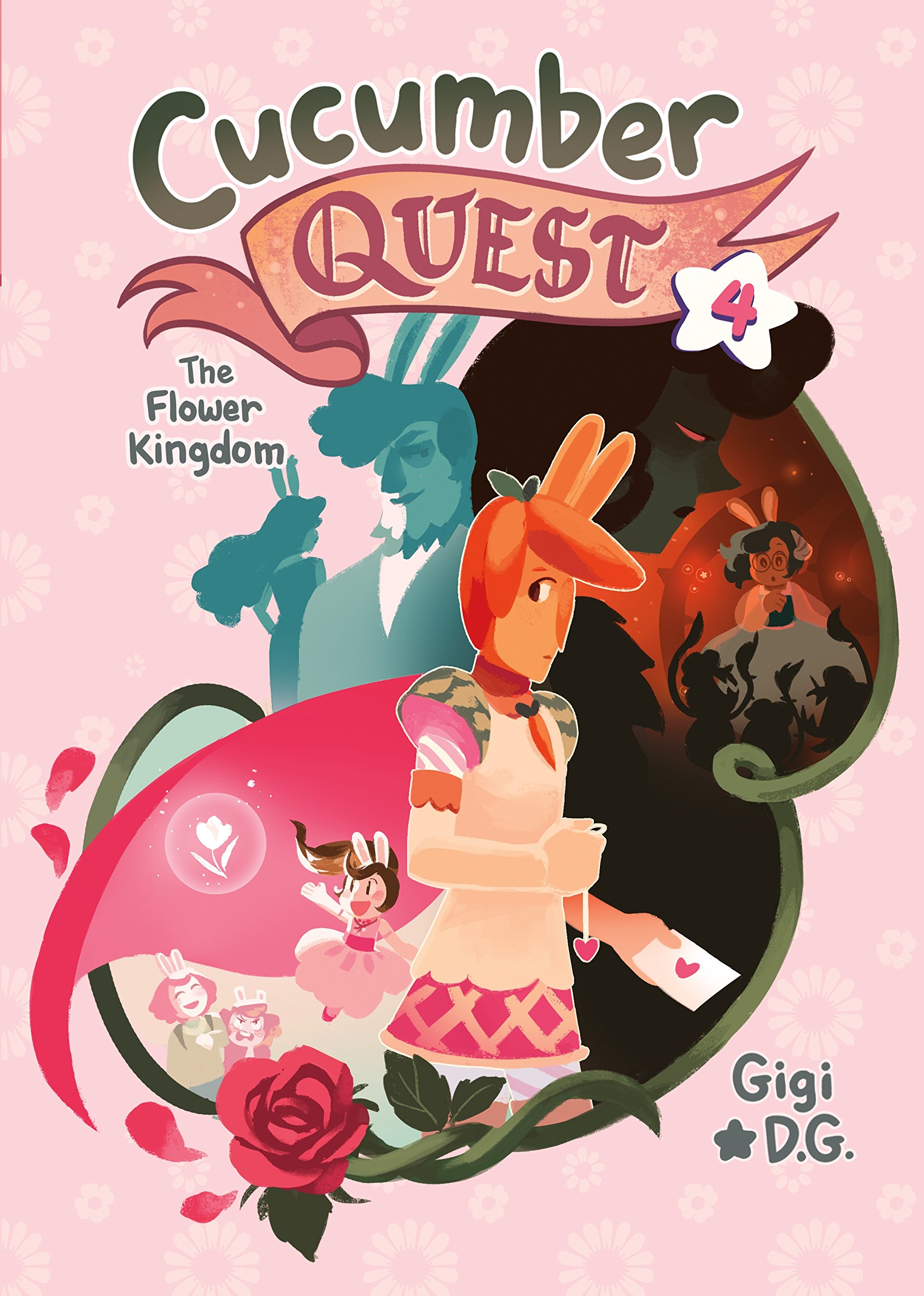 What’s in a name?

In order to defeat the Nightmare Knight, legend dictates that the DreamSword must be autographed by seven princesses. But things get a bit complicatedwhen our heroes discover that the Flower Kingdom has no royalty! Luckily, the”king” of fashion, Mr. R is on the hunt for the new face of his styleempire, and whoever catches his eye will be named… (wait for it…)”Princess R”!

Who will claim the coveted title? And why does it feel like we’re forgetting something important…?