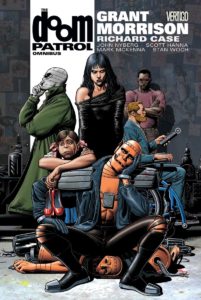 The world’s strangest heroes have left behind almost every vestige of normality. Shunned as freaks and outcasts, the Doom Patrol faces mystifying threats that must be defeated—at any cost. These are the epics that introduced Rebis, Crazy Jane, Dorothy Spinner, the Brotherhood of Dada and more!

The character of Rebis is one of the only intersex characters in mainstream comics. However, Rebis’ intersexuality is treated as a condition or affliction, rather than viewed through the perspective of a lived experience.

“The Doom Patrol was initially invented in the early ‘60s, around the same time as Marvel’s X-Men, which it resembled in a number of ways: It was a group of people seen by “normal” society as freaks, outcasts, and weirdos, led by a wheelchair-bound genius (the Chief, for the Doom Patrol). Morrison, a British writer just beginning his long and much-praised career in American superhero titles, took the basic concept and pushed it to places where mainstream comics had rarely ventured. The new members of the Doom Patrol who he introduced were not white guys marked, through various fantastic mechanisms, as marginal or persecuted. Rather, the members of the Doom Patrol were marginal in their world for much the same reason that they’d be marginal in ours.

Cliff Steele, Robotman, the one holdover from the old team, had always been portrayed as a freak, but Morrison went further and linked his plight directly to that of the disabled. In the first issue of Morrison’s run (Doom Patrol #19) Cliff is shown as a full-body amputee; he talks about having not just phantom limbs, but phantom bowels, and at one point starts bashing his head against a wall in a futile effort to feel pain again. Another team member, Rebis, is a hermaphrodite or androgyne fusion of a white man and a black woman; s/he is both queer and biracial. Crazy Jane was abused as a child and has 64 different personalities, each with its own separate power. Dorothy, a young psychic, has Simian features that make her strikingly ugly. And Josh, or Tempest, is black, but the team is diverse enough that he gets presented as the bastion of normality and a father figure for Dorothy—not roles that African-American heroes often get to play in the still embarrassingly white world of mainstream superhero comics.” (Source: The Atlantic)”The Doom Patrol had been kicking around in one form or another since 1963, a team of superpowered weirdos and outcasts led by a genius in a wheelchair (and yes, that premise has a lot in common with the X-Men, apparently by coincidence). The first great idea in Morrison’s incarnation of the series was playing up the idea that “superheroes” could mean “people who have something terribly wrong with their bodies.” The group’s mainstay is Cliff “Robotman” Steele, a former race-car driver whose brain powers a robot body; as he puts it in Morrison’s first episode, he’s a “total amputee.”

Morrison’s second great idea was to take inspiration from the early Surrealists — not just for the sake of weirdness but for the sake of a direct path to the unconscious — and from the films of Jan Švankmajer. The Doom Patrol’s old adversaries the Brotherhood of Evil are replaced by the Brotherhood of Dada; their bandage-swathed ally Negative Man is integrated into a hermaphroditic alchemical spirit called Rebis. One episode’s cliffhanger is a villain called the Shadowy Mr. Evans declaring “Rrrrreverth my buttockth, thergeant major!” beneath a giant hovering pyramid with three eyes. (Case, along with the many guest artists who worked on the series, cleverly integrates Surrealist images into the visual grammar of superhero stories.)” (Source: LA Times)

The Verge: “Into the black hole: an interview with comics author Grant Morrison“ 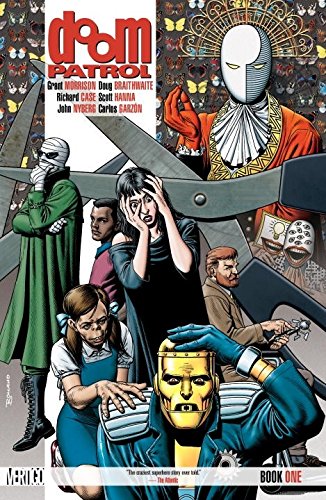 In these tales from DOOM PATROL #19-34, the world’s strangest heroes have left behind almost every vestige of normality. Shunned as freaks and outcasts, the Doom Patrol faces mystifying threats that must be defeated—at any cost. These are the epics that introduced Rebis, Crazy Jane, Dorothy Spinner, the Brotherhood of Dada and more! 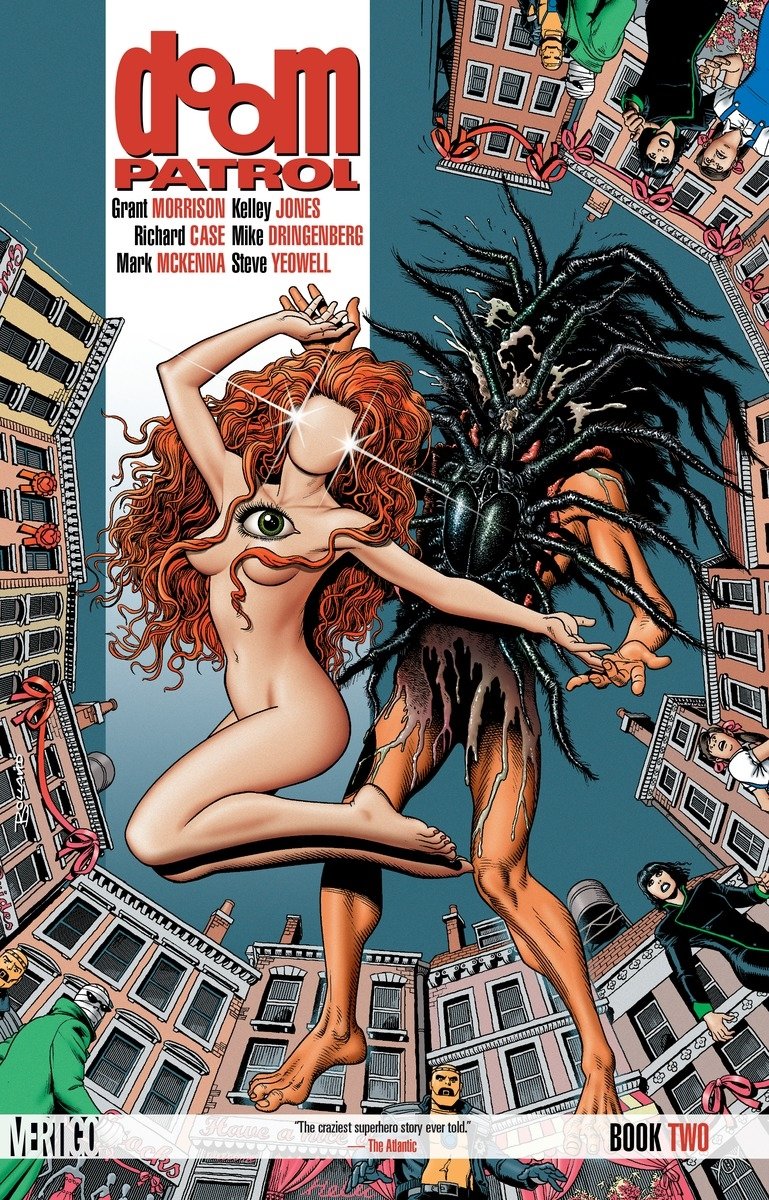 These stories from DOOM PATROL #35-50 feature the debut of Danny the Street, the first appearance of Flex Mentallo, and, through it all, an incredible saga of cosmic war and super-evolving consciousness! Plus, learn the final fate of the Brotherhood of Dada and witness the rise of the unstoppable Candlemaker! 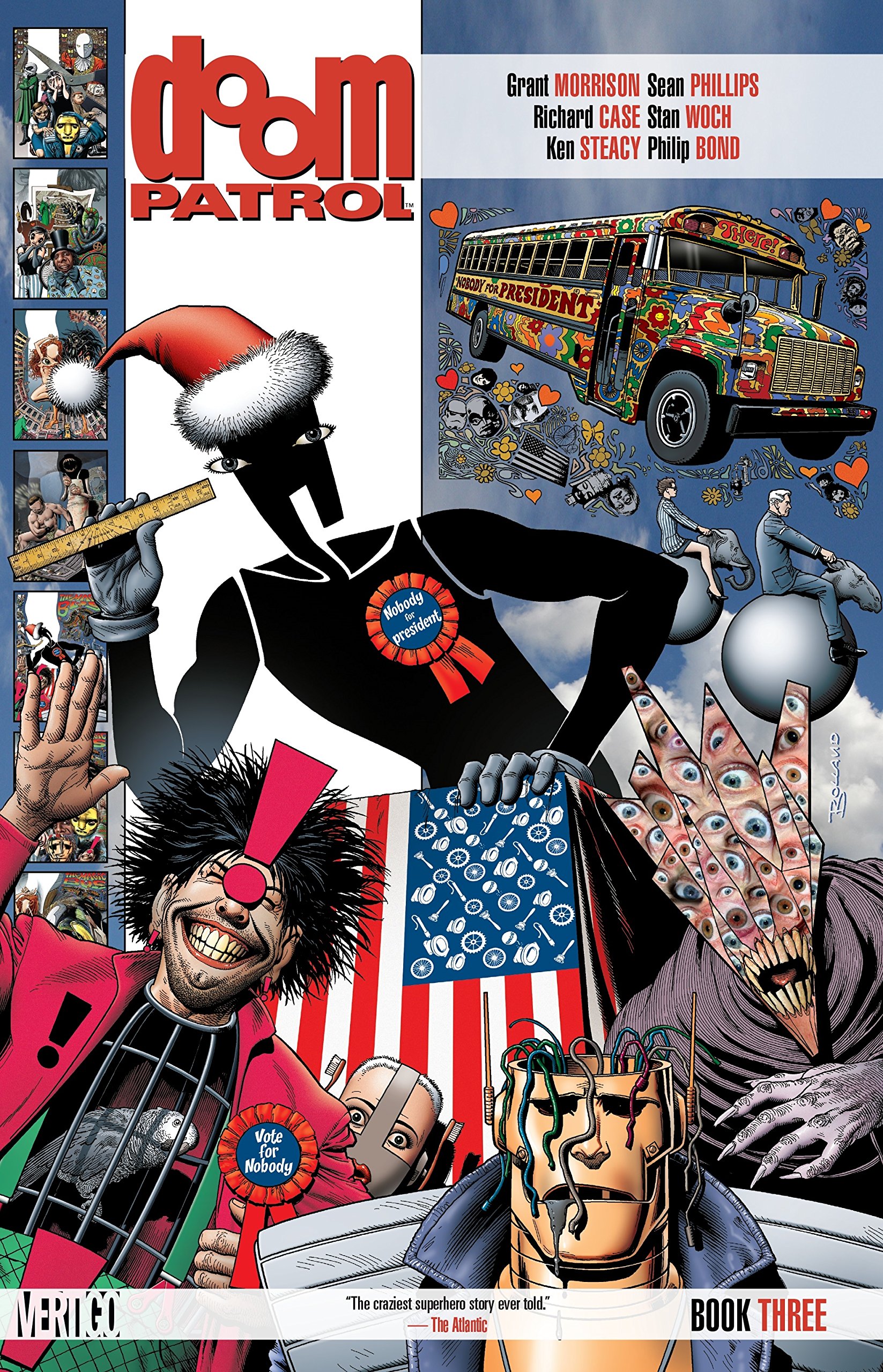 In these tales from issues #51-63, the Doom Patrol must face new challenges: the final fate of the Brotherhood of Dada, the rise of the unstoppable Candlemaker, Danny the Street meets his cosmic destiny and Crazy Jane attempts to find her place in the world. Sound strange? Well, not as strange as the superhero team fighting them. This new title also includes the legendary DOOM FORCE SPECIAL #1. 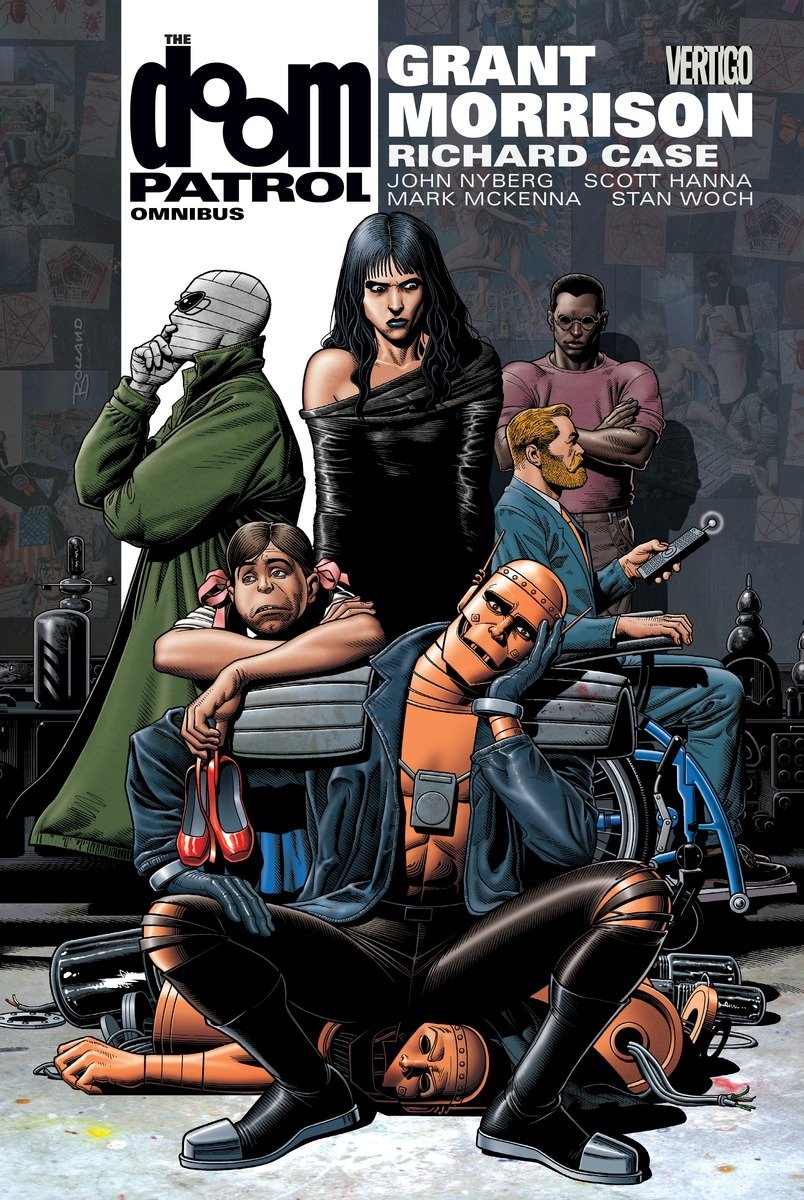 The entire run of Grant Morrison’s DOOM PATROL is collected in hardcover! These tales turned Super Hero adventure on its head, challenging the boundaries of the genre with characters like Crazy Jane, the Brotherhood of Dada, Flex Mentallo, Danny the Street and many more! Collects DOOM PATROL #19-63 and DOOM FORCE SPECIAL #1, with a new cover by Brian Bolland! 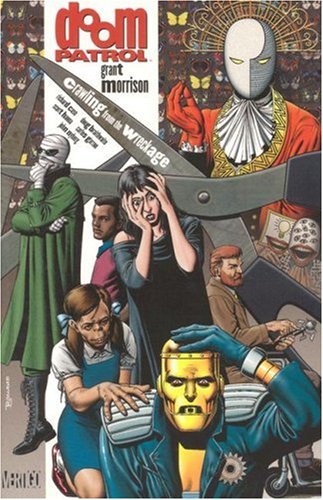 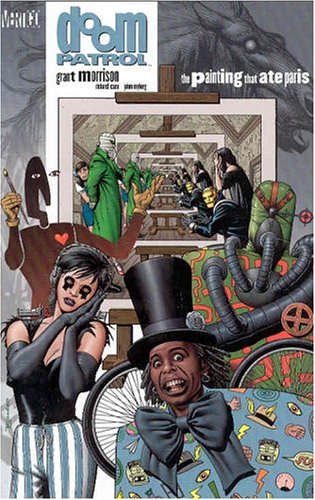 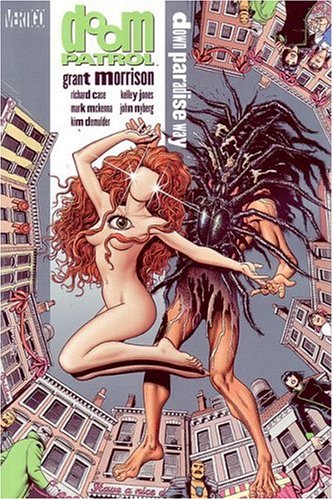 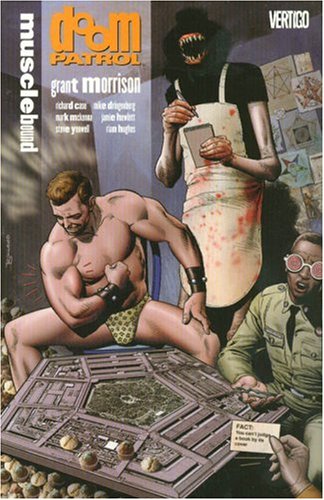 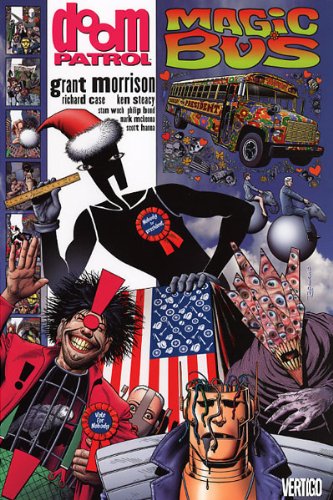 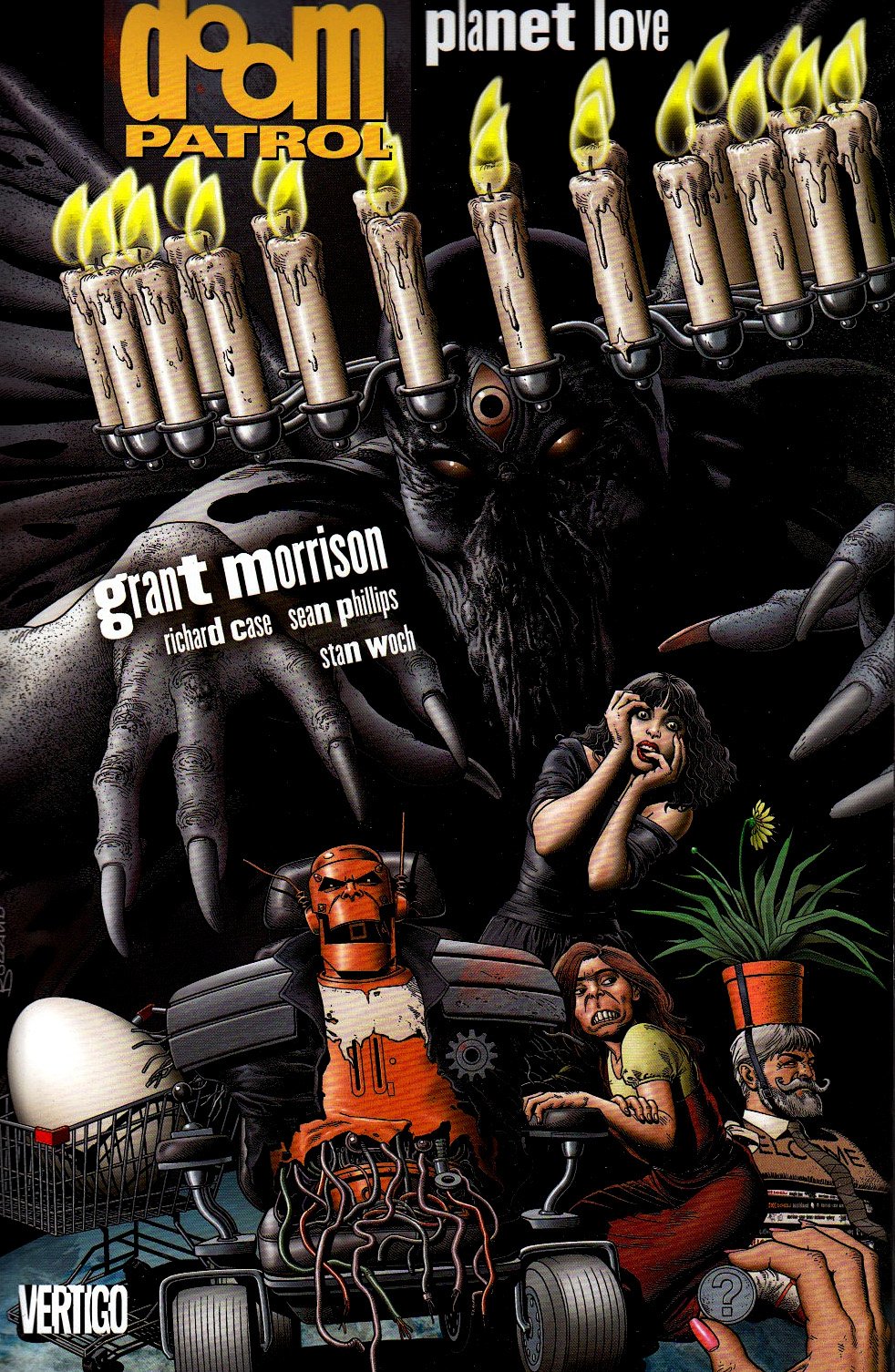