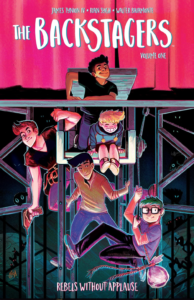 When Jory transfers to the private, all-boys school St. Genesius’s, he figures joining the stage crew would involve a lot of just fetching props and getting splinters. To his pleasant surprise, he discovers there’s a door backstage that leads to different worlds, and all of the stagehands know about it! All the world’s a stage…but what happens behind the curtain is pure magic!

The first two volumes of The Backstagers are by James Tynion IV and Rian Sygh. The third volume collects two holiday anthology issues by various creators.

As of June 2019, no further releases of The Backstagers are anticipated. However, the tie-in novel series written by Andy Mientus is ongoing.

“In addition, this book is an example of representation on the page and off, something we frequently ask for and rarely get. The writer is bisexual and the artist is transgender. I was drawn to this book for the cute concept and vibrant art. It was a pleasant surprise to find out that the main protagonist is a queer person of color. I highly recommend picking it.” (Source: Black Nerd Girls)

“The creators introduce a colorful cast of characters that bypass the usual high school jock/geek tropes and skew towards the more unusual. It does seem like main protagonist Jory transitions a little too easily from social outcast to happy club member over the course of this issue, but we’ll see how well Tynion maintains the character drama over time. Sygh’s cartoonish style creates a unique and very exaggerated look and feel, one that’s equal parts Scott Pilgrim and Steven Universe. This is not a comic afraid to get silly or weird, and that’s one of its greatest strengths.” (Source: IGN)

“James Tynion IV and Rian Sygh prove the perfect team to bring this comic to life. It’s over-the-top in the best ways, feeling much in the same vein as modern Saturday morning cartoons like Steven Universe with a heaping dose of anime inspiration for good measure. The sense of comedic timing throughout the issues of setup, beat, punchline more often than not ends in a closeup panel of a character framed in a pastel colour and with sparkles in their eyes. It’s a book about masculinity that’s not afraid to appear feminine because it’s creators clearly understand that acting feminine does not undermine masculinity. It’s a story about understanding that you do not have to follow the strict guidelines society creates for you based on your gender and the earnest character writing and over-the-top, cartoon-y style of art makes it a wonderful read.” (Source: Multiversity Comics)

“Beckett appears in a binder and is shorter than most of the other Backstagers, and even shorter than his crush, Bailey Brentwood, the coolest girl in the world (something very exciting to me, at 5’6”). The Backstagers doesn’t shy away from details that make it clear Beckett wasn’t always the Beckett of today, but there’s never a moment where it’s painted as a startling revelation. They’re presented as ambient details of Beckett’s life that, while important, have no bearing on any character’s perception of Beckett as a backstage boy.” (Source: Paste Magazine)

Comics Alliance: “Bi the Books: James Tynion Pulls Back the Curtain on Erasure and Queer Haircuts”

Comics Alliance: “James Tynion IV and Rian Sygh Go Behind the Scenes with ‘The Backstagers'” 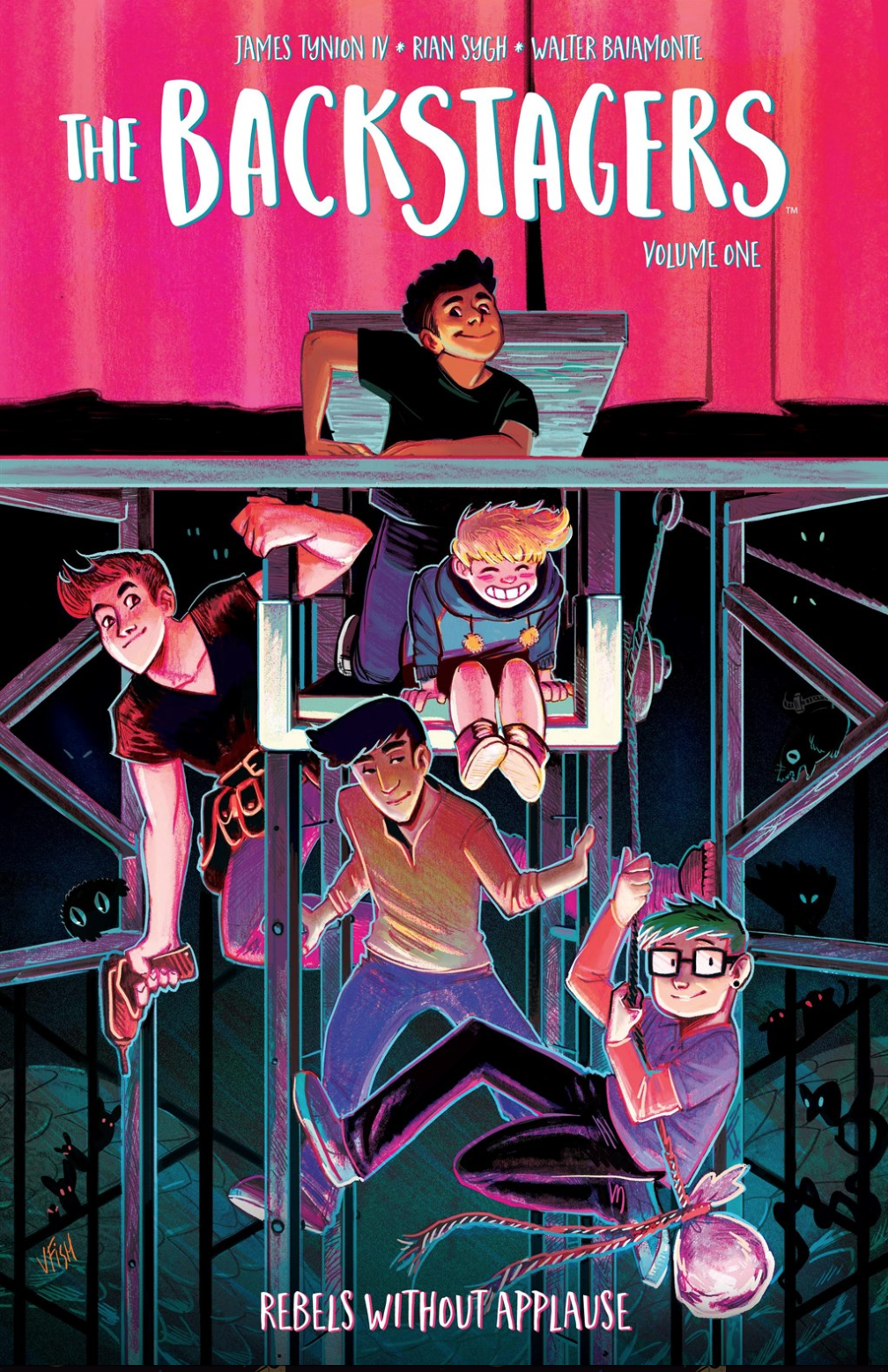 The Backstagers, Vol. 1: Rebels without Applause 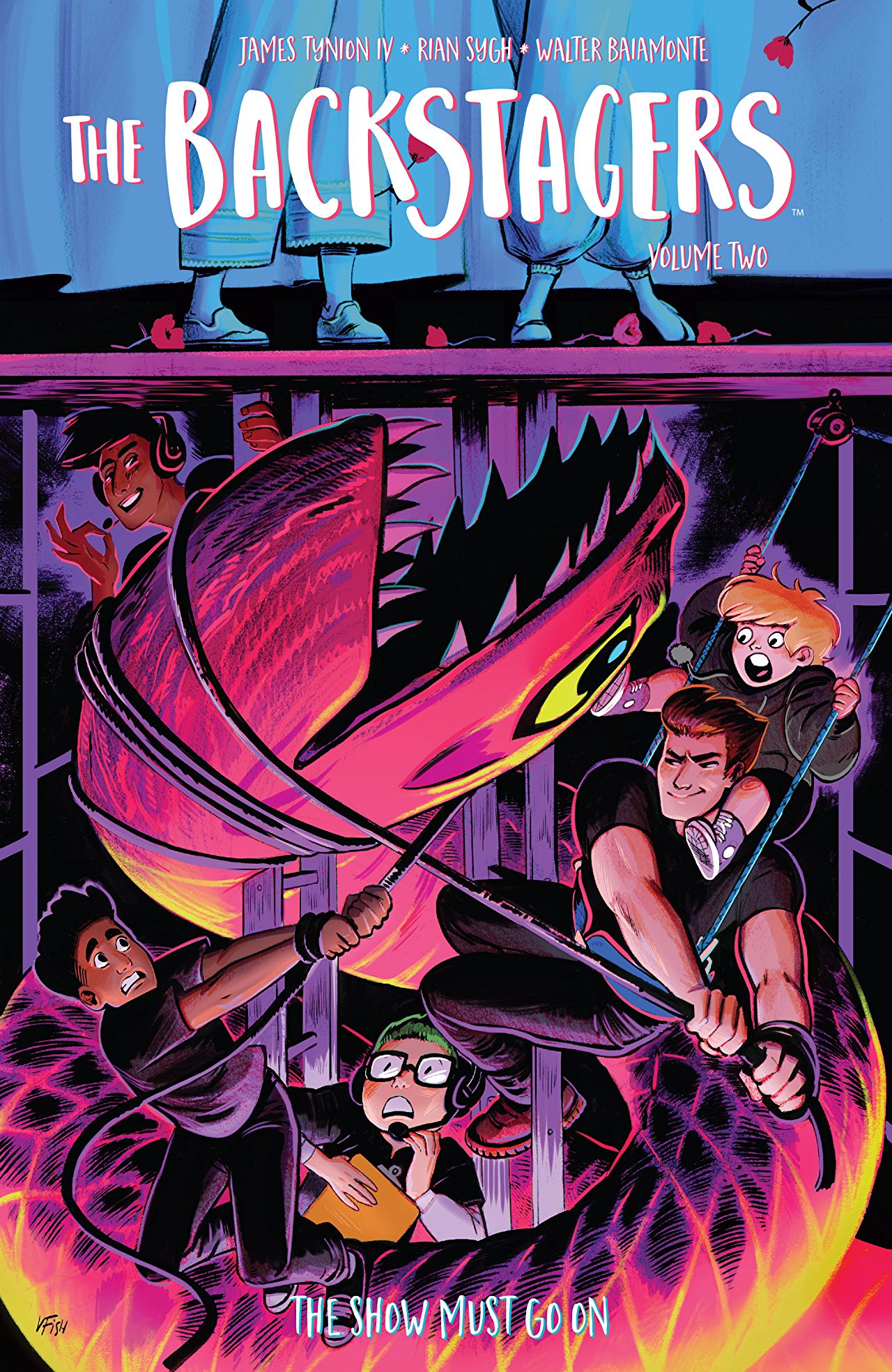 The Backstagers, Vol. 2: The Show Must Go On

Jory and the rest of the Backstagers have one goal this semester: to put on the best show their town’s ever seen. But best-laid plans aren’t easy to achieve when there’s an entire magical world that lives beyond the curtain! When one of the actors suddenly goes missing, the Backstagers must band together to save their comrade and maintain the natural balance of…theater. James Tynion IV (Detective Comics, The Woods) and artist Rian Sygh (Munchkin, Stolen Forest) explore what it means to be an outcast looking to find one’s place in an earnest story of friendship and self-expression. Collects the final issues #5-8. 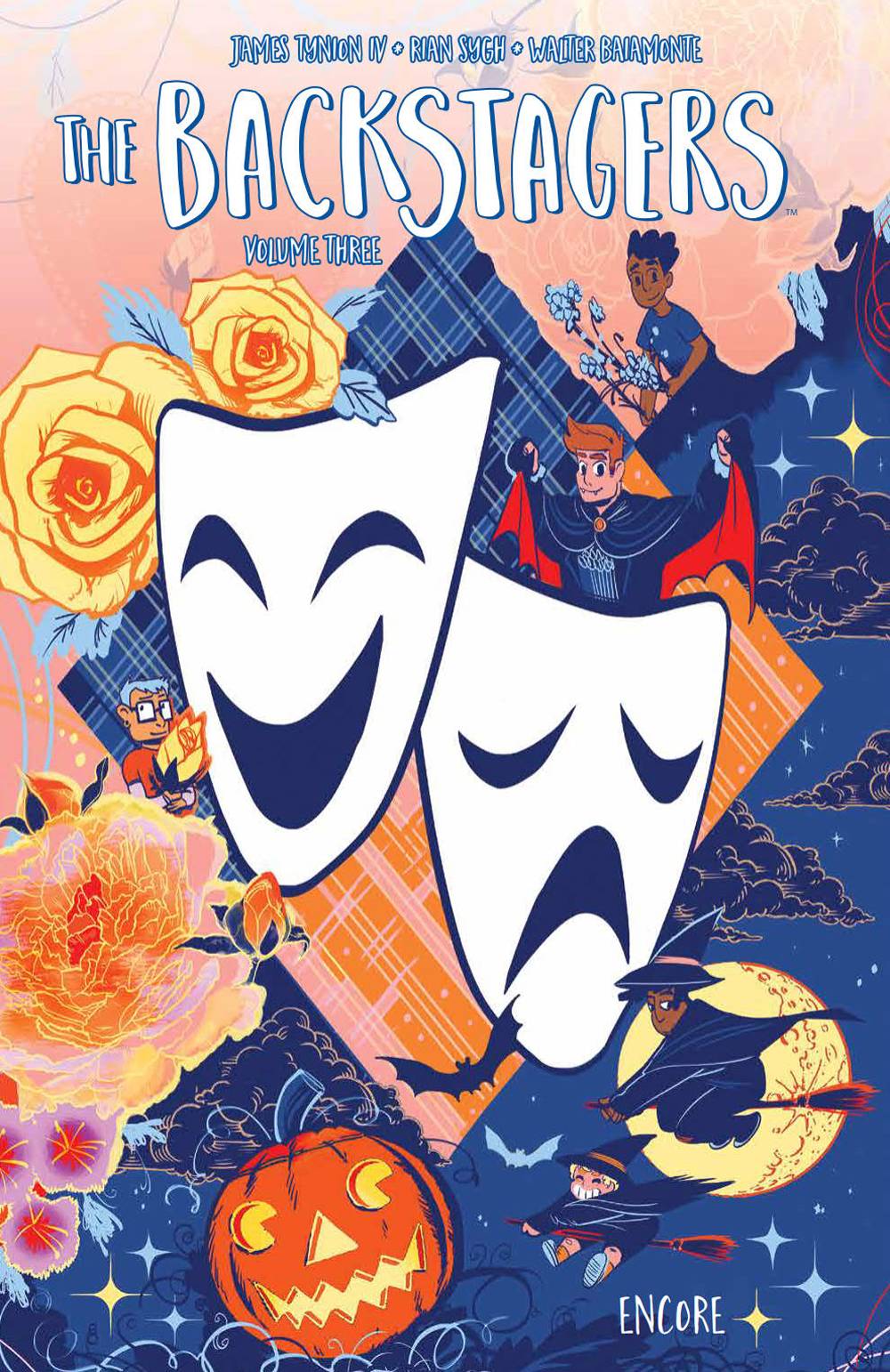 The Backstagers are back in (stage) blacks for a festive collection of Valentine’s Day and Halloween stories! Join Jory and the rest of the Backstagers as they wrestle with anti-Valentine crusades, totally creepy phantoms (NOT of the opera), and the ever present magic of the backstage world in this romantically spooky third volume of the hit series.